May 20, 2016May 18, 2016
this post is originally from May 28, 2011
As I create my blog and go over all my old emails from past trips I am a bit disappointed with my posts from Morocco. There was so much more to this amazing country and I didn’t even touch on so many places that I got to see. Unfortunately by me posting old emails from 5 years ago the stories are not as fresh in my memory bank and I can’t give you as much information as I would like. 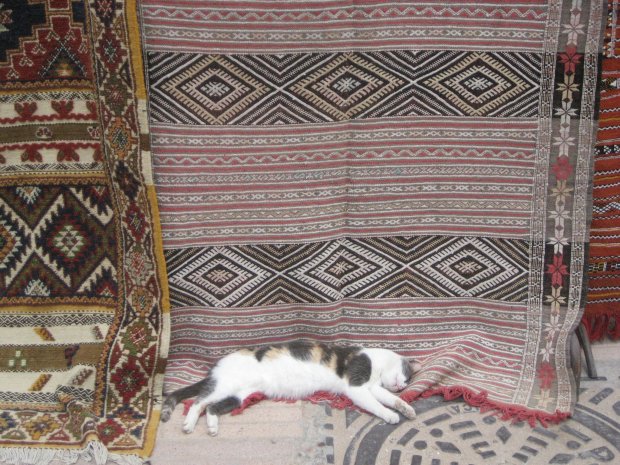 So with lack of interesting stories I will attempt to fill in the blanks…
From Casablanca we traveled to Morocco’s capital city, Rabat. We toured a beautiful mausoleum which happens to be the final resting place of the current King’s father and grandfather. We then ventured uphill to enjoy the impressive architecture of Kasbah des Oudaies, an ancient fort with magnificent views. I remember sipping Morocco’s famous mint tea while looking over the water. It was truly picturesque.

I also remember that when we were near the parliament building there were massive protests going on. But you wouldn’t believe what happened when the ‘call to prayer’ sounded on the intercom…all the protesters got down on their knees to pray!

Meknes was the next town on our tour. The first night was spent in the colourful souq where many Moroccan families come to be entertained by story-tellers, snake charmers, horse rides and medicine men. The imperial city of Meknes was flattened by an earthquake in 1755, but what was left was incredibly impressive. We visited the Mausoleum of Moulay Ismail as well as the massive ornamental 18th century gate.
Next we made our way through the rolling hills to the impressive Roman ruins of Volubilis.

This is the best preserved Roman ruins in this part of northern Africa. It was once a Roman Empire, but now is a UNESCO World Heritage Site.
Fes was the next stop. The  Fes Palace is not only the most historically and culturally important palace, but it is home of Morocco’s most impressive Royal Palace. The Fes medina is the word’s largest living medieval medina and is also a UNESCO Heritage Site. The medina is a completely chaotic and confusing melee. We explored the artisans quarters; such as the brass and copper souqs,  and the wedding souq.  There were also corners of the medina that specialized in  carpenters, bakers, butchers and spice sellers. What truly impressed me was climbing to the top of one of the buildings and looking down at Fes’ famous tannery.

They die the leather in this massive area where there are pools of coloured water. One day all the pools with be in blues and the next, reds…depending on the colour that they are dying all the leathers. It was actually pretty beautiful! I also remember one night we went to a little restaurant where we met the owner. This old, tiny little man had the biggest grin. He used to be a circus performer and we ended up having handstand contests right there in the restaurant! 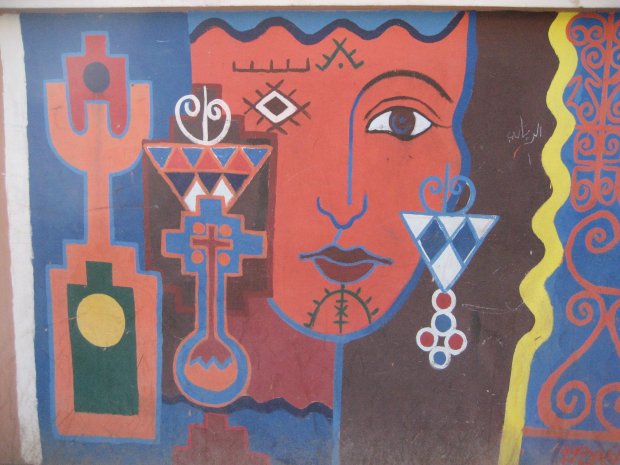 During the full day’s drive to the Sahara Desert and the town of Merzouga  we passed such diverse landscapes. We passed through cedar and pine forests, over the Middle Atlas Mountains, and finally through the pre-desert countryside full of deep gorges and many palm groves. 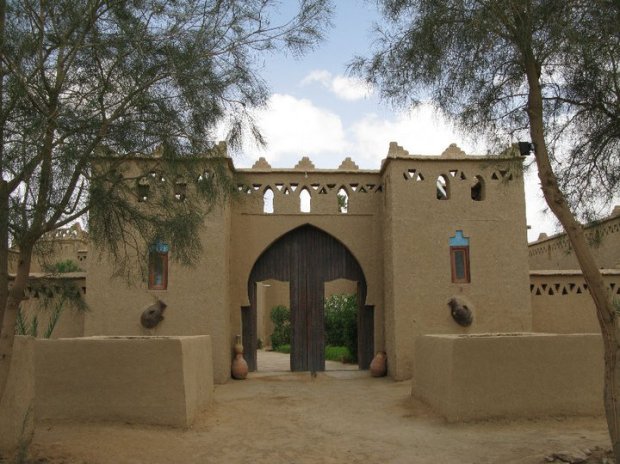 The town of Merzouga was like a fairy tale. All the houses looked like they were made of clay and there were no roads. It was all sand. This is nothing like I have ever seen before! 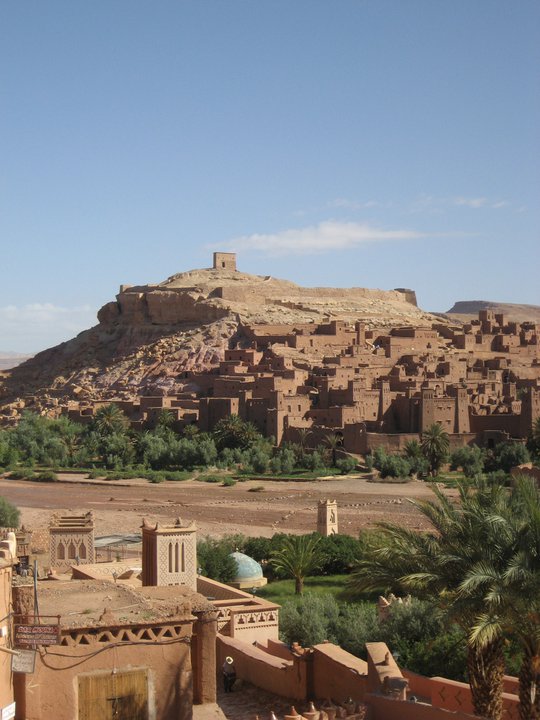 Ait Ben Haddou is another stop that was a wonderful example of a collection of kasbahs – a type of fortress. It has been restored over the years and now is classified as a UNESCO Heritage Site, being considered one of the best preserved Kasbah villages in all of Morocco.I think this is where they filmed one of Russel Crowe’s movies … Gladiator??

Leaving the desert we headed for the High Atlas Mountains where we crossed the Tizi n’ Tichka Pass.  The roads through these mountains were extremely windy and a tad treacherous.  At one point traffic came to a stand still and we sat there for quite some time while a crew fixed the roads. Only when we finally moved did we realize what just happened. There had just been a rock slide and the crew were trying to get the rocks off the road. In the midst of waiting in the blistering heat we had great entertainment. As we sat there we had front row seats!  Fights were breaking out and people were literally punching each other. Now that is road rage!

The village that we hiked to the homestay Berber house was called Imlil. Because of the higher altitudes it felt a lot colder. The Berber people were so welcoming, and entertained us with their traditional music.
Morocco is famous for its argon oil.  The Argon tree, that is only found in southern Morocco produces these seeds that fall to the ground.

People grind these seeds down to an oil, which is now found in so many beauty products. We got to visit a Women’s Cooperative where we got to see how the oil is made and meet the incredible women who live off this industry. What was really cool was seeing the goats that hang out up in the tree branches. The goats also like the argon seed and you would drive past a tree with 10-15 goats perched in the branches like birds. So bizarre!

Then there was the beautiful Atlantic coastal town of Essaouira. There was so much to do and see here. I wish we had more time in this lovely town.
And finally…Marrakech. The heart of Marrakech is El Fna Square, which happened to be the place that a bomb went off in Café Argana  just a week before I left for the trip. 16 people were killed – mostly all were tourists. 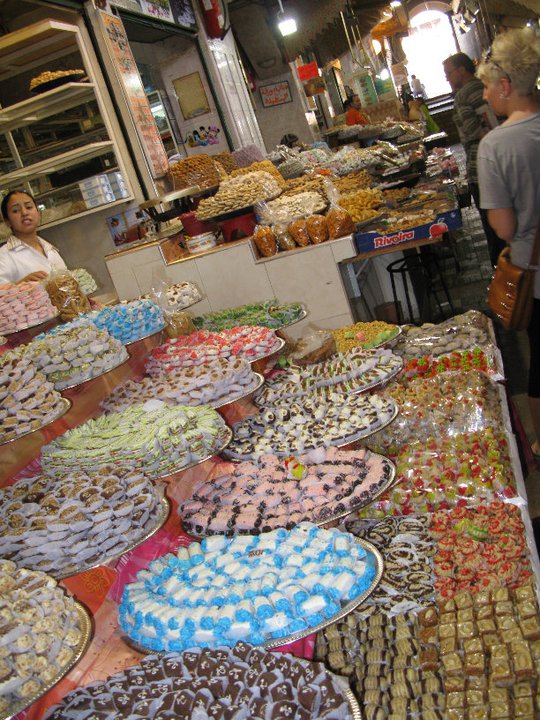 The markets of Marrakech were quite a sight. Only after talking to our guide did we realize why there were so many turtles being sold. Many stalls in the markets sold random shit for black magic to cast spells. Apparently there is a lot of black magic in Morocco. Also there were skins from many African wildlife you could buy. Zebra, Leopards, Lions just to name a few. It was pretty horrendous but eye opening! 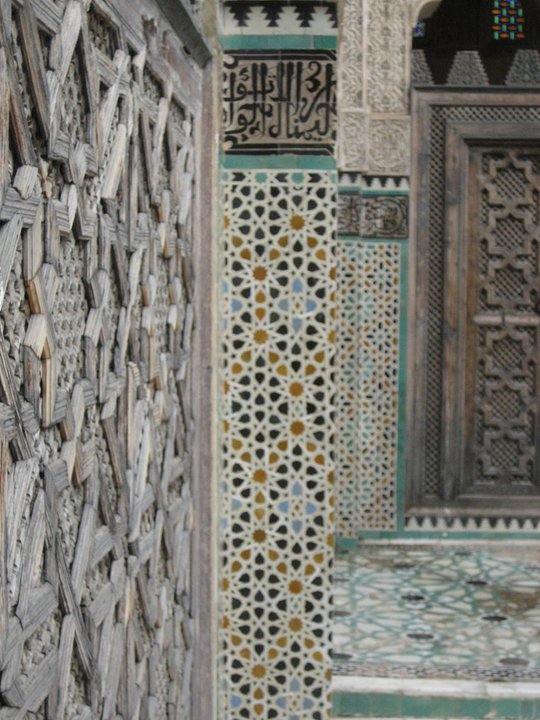 Anyway, I know this is just a jumble of information, but I thought I had to fill in the blanks a little as my previous posts were sub-par!

I feel honored to have been asked to create these three custom pieces that will hang together on a feature wall. They wanted each piece to include family members and landmarks from home. The last piece I covered the faces for privacy of the children but you can still see most of the canvas. When someone wants my art on their walls I can’t help but feel so excited and grateful. 🙏🙏🙏🙏🙏 #mixedmedia #customartwork #theurbanwanderer #familyties #edmontonartist
Be your own kind of beautiful! Here is my latest creation that will up for sale. It’s on a 12x12 canvas - acrylic, pen and ink and covered with resin $125
and here are the rest…
HOLIDAY SPECIAL Are you looking for a unique gift for a loved one? How ‘bout an original mixed media painting by yours truly! Each canvas is uniquely crafted with acrylic, watercolor, pen and ink, photography and covered with resin to give it a glassy sheen. Each piece has a beautiful quote on the back to inspire and motivate. 1. Mandala Turtle 12x12. special $100 2. Hamsa Elephant 12x12. Special $100
Did someone say it’s National Cat Day? No need to give me a reason to post pictures of my cats 😻😻 #nationalcatday #meow
Mala’s Mala’s Mala’s 📿📿📿📿📿📿 Get the perfect gift before I drop them off at stores to be sold to the masses! #malanecklaces #yegmade #madeinedmonton #theurbanwanderer #grandeur #themakerskeep
Mala Drop Day 2 - these new pieces are up for sale and ready to be gifted! #malanecklaces #crystalhealing #theurbanwanderer #themakerskeep #grandeur
Mala Alert 🚨Looking for the perfect gift? Check out the newest Urban Wanderer pieces I’ll post in the next few days. #theurbanwanderer #themakerskeep #grandeur #edmontonmade #malanecklaces
Can’t get enough of sunny fall days in Edmonton! Another shot from this weekend in the river valley. #myedmonton #falldays #yeggers #rivervalley
Check out the newest line from The Urban Wanderer ~ These Chakra bracelets are 6mm stones with a gorgeous lotus centre. Each colour and stone represent a different chakra. Soon to be selling at Grandeur $30 each 💜💙💚💛🧡❤️🖤 #chakrahealing #chakrabracelet #theurbanwanderer #grandeur #themakerskeep #whollyhandmade #yegmade
It’s all about perspective! #walterdalebridge #yeggers #myedmonton #lookingup
Spending a bit of my Sunday taking in the beauty of Edmonton in the fall and of course this amazing new street art on 109th. I would love to be someone’s assistant one day and work on a mural like this! #edmonton #myedmonton #pinkgorilla #streetart #fallcolours #rivervalley
On Thursday I posted about Truth & Reconciliation Day and I spoke about the Indigenous People as Canada’s Indigenous. After reading @tiplerteaches post I realize I was wording it all wrong. Indigenous People were here long before Canada became a country. I apologize if how I worded my post was disrespectful. I am learning and I am grateful to all those who are teaching. #truthandreconciliation #foreverlearning #everychildmatters🧡
Today is National Truth and Reconciliation Day in Canada. I know that I will never understand the depth of pain so many Indigenous Canadians went through but I promise to keep learning and I honor all those who have been affected. My heart is with you today and every day 🧡
Apparently it’s World Gorilla Day and I can’t miss out posting another photo from that incredible day back in Uganda. I feel so insanely grateful that I’ve been able to see this majestic creature in the wild. Happy World Gorilla Day! #worldgorilladay #gorilla #uganda #imsograteful🙏
And few more ready to go …
First dibs before the new batch gets sent off to stores. Love & Light Mala ~ Rose Quartz, Amazonite, dried flowers in pendant $85 Being Connected Mala ~ White Agate, Red Agate, Red Jasper, Onyx $80
Throwback to 1994…Happy National Gymnastics Day! Whoa that was a looooong time ago! #nationalgymnasticsday #rhythmicgymnastics #canadiangymnastics
And the last of the newest Malas * Make a Wish Mala - A dandelion seed pendant, Howlite, Hematite $80 * Optimism & Abundance Mala - Jade, Crystal Quartz, Yellow Aventurine, Green Aventurine $85
And a few more to the collection. * Serenity by the Ocean Mala - Silver plated shell, Riverstone, Sunstone $85
Follow The Urban Wanderer on WordPress.com