On my last day in Brazil I was lucky enough to visit Rio’s largest favela called Rocinha. Rocinha is a shanty town that is sandwiched between two wealthy areas of Rio. It’s on a mountain overlooking the city and it became really well known after the 2002 Oscar winning movie City of God. Although it only occupies less than a square mile of land it’s home to about 75000 people! Houses are tightly packed together and some are stacked on top of each other as tall as 11 stories high. Over the years the homes have evolved from wood and tin to more stable materials like concrete. Basic sanitation is now available to about 80% of the population.

The slum has economic opportunities but its most well known for its drug related violence. There are two gangs that run the favela and for this reason it’s really unsafe to go without a guide. I was hesitant to go because I feel like ethically it’s wrong to go see someone’s life as an ‘attraction’. People were doing this in India and it made me so mad. But after learning more about the favelas, tourism has actually acted as a catalyst for positive development. Even knowing this I questioned my decision to go, but seeing the reaction from the people that live there I am so happy that I went. Clearly our guide was well respected as everyone would greet him and hug him. He took the laws of the favela seriously and only when we were allowed, were we able to take photos. During most of the time there we had to put our cameras away. Why? Because the drug lords were everywhere. Mere teenagers sat at corners with machine guns and AK-47’s. At one point I saw a picture perfect opportunity – brightly coloured chickens pecking around debris. I asked if I could take a photo of this and he said with the most stern tone ‘definitely no – you’ll see why in a few steps’. Just right around the next corner were gang members with their guns displayed proudly across their laps. He also showed us all the bullet holes from previous gang brawls.

Amongst the crime and chaos the people of the favela are a tight knit community. We were taken to a place where artists proudly displayed their work and I was able to buy a piece. Street art is also literally at every corner with positive messages of hope and encouragement. Children still go to school and around the time of the 2016 Olympics various athletes (including Michael Phelps) built a sports centre with a school right near the favela. The centre is free as long as the child is in school. And crazily enough 95% of children in Brazil are in school. Sport is important to Brazilians and so many famous soccer stars grew up right here in the favelas.

Overall we spent about 2 hours in Rocinha. We started at the top of the mountain and meandered all the way to the bottom. I got to play with children a little, listen to a local samba band and buy treats at a bakery. Although the walkways around the favela are narrow, steep and somewhat nonexistent there was order in the chaos. Houses are purposely not numbered in order so that police will never find anyone. Everyone looks out for each other and it was so heartwarming to feel the warmth and welcome from the community. 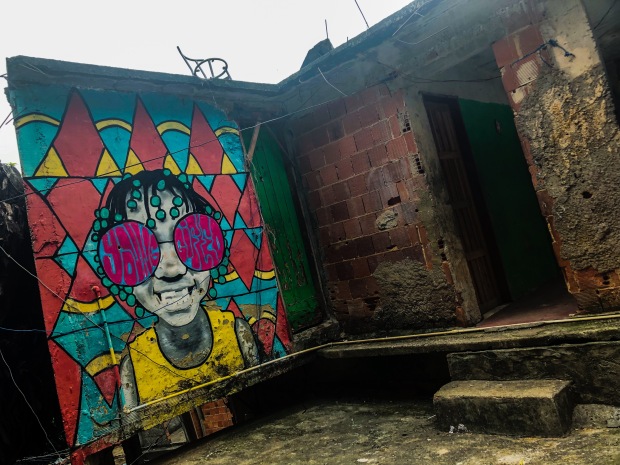 As soon as we left the favela it was time to pack our stuff and head to the airport.  It’s crazy that this adventure has quickly come to an end. Even though I was a hobbling mess for most of the trip it was another great trip. Rio is the most beautiful city I’ve ever seen. Brazil is so incredibly beautiful with its bright colours. And the people are warm and kind.

Not surprising I met some lifelong friends. We shared so many laughs and those memories will stay with me forever. It was sad to say goodbye but hopefully our paths will cross again. 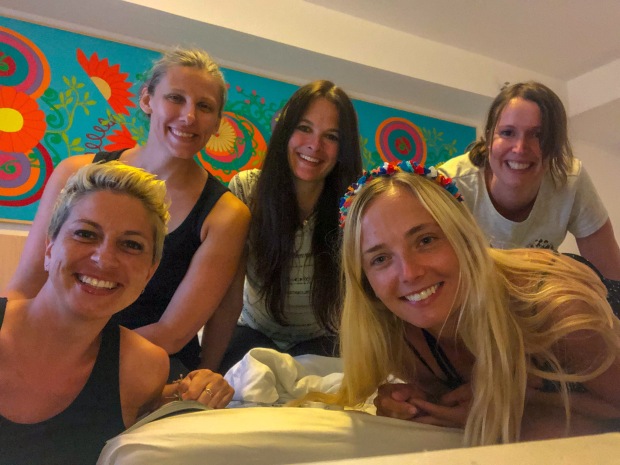 Before I sign off I made note of some random things …

Travel is truly a spectacular gift and I’m so grateful that I have been able to experience another corner of the world. Thank you for following my journey.

I usually only go away once a year but this year is a little different. I already have my next trip planned for September. I will be going to Greece for a couple weeks to work in a Syrian refugee camp. I’m so excited for that experience and I hope you’ll come along for that ride too.

I feel incredibly grateful to live so close to the ravine. It can’t get much better than seeing a deer. Inhale the fresh air/exhale gratitude 🧡💛💜 #edmonton #edmontonliving #albertawildlife #gratitude
Here’s the first installment of Nanny Knows Best -Ellie on pop culture!
Here is another piece hit off the press! I was actually able to use my wife’s photo in the background of a budding poppy. Nature has some pretty cool shapes and patterns! 12x12 $125
Here’s my newest piece - inspired by my travels to Africa, I can say that zebras do like to turn around and show off their ‘ASSets’! 12x24 $150
As 2022 approaches and we look back on the past year I hope that we can all embrace the memories, good and bad that we’ve had over the year. For me 2021 was a year of mixed emotions. It started with my wedding ceremony being cancelled due to Covid and travel restrictions, then ankle surgery, then an amazing trip to South Africa to visit my wife as soon as we could travel again. From there it has been a waiting game to predict when Liza would finally be approved for permanent residency. We both believed she’d be here for Christmas and clearly that did not happen. What I’ve learned is it’s best to not create expectations and instead try to embrace the little things. There are little joys all around us and even though I want her here as soon as possible I try to remind myself not to wish the days away and enjoy all the stuff in between. From the bottom of my heart I wish everyone a Happy New Year. May 2022 be full of love, laughter and small wins that make your heart dance. Lots of love to you all! 💕
Merry Christmas to all my friends around the globe. Wishing you a wonderful holiday and hoping you can spend some time with those you love. Throwback to 1983 - I can remember my mom taking me to see Santa many, many times growing up. I also remember on Christmas Eve Jennifer and I got to sleep in the same bed with so much anticipation for the morning. We were all incredibly spoiled, always had a giant meal and always had family around to share the festivities. Christmas will always hold such dear memories. #missingmywife #merrychristmas #chrismasthrowbacks
November 30th 2020 was a very special day for me. It was the day I married the most amazing human. It makes me so sad and frustrated that we still can’t be together but I am so grateful that I have found my soulmate. I hope that soon we can be together for good and start our lives together as a normal married couple. Happy anniversary My Person - I love you endlessly.
I feel honored to have been asked to create these three custom pieces that will hang together on a feature wall. They wanted each piece to include family members and landmarks from home. The last piece I covered the faces for privacy of the children but you can still see most of the canvas. When someone wants my art on their walls I can’t help but feel so excited and grateful. 🙏🙏🙏🙏🙏 #mixedmedia #customartwork #theurbanwanderer #familyties #edmontonartist
Be your own kind of beautiful! Here is my latest creation that will up for sale. It’s on a 12x12 canvas - acrylic, pen and ink and covered with resin $125
and here are the rest…
HOLIDAY SPECIAL Are you looking for a unique gift for a loved one? How ‘bout an original mixed media painting by yours truly! Each canvas is uniquely crafted with acrylic, watercolor, pen and ink, photography and covered with resin to give it a glassy sheen. Each piece has a beautiful quote on the back to inspire and motivate. 1. Mandala Turtle 12x12. special $100 2. Hamsa Elephant 12x12. Special $100
Did someone say it’s National Cat Day? No need to give me a reason to post pictures of my cats 😻😻 #nationalcatday #meow
Mala’s Mala’s Mala’s 📿📿📿📿📿📿 Get the perfect gift before I drop them off at stores to be sold to the masses! #malanecklaces #yegmade #madeinedmonton #theurbanwanderer #grandeur #themakerskeep
Mala Drop Day 2 - these new pieces are up for sale and ready to be gifted! #malanecklaces #crystalhealing #theurbanwanderer #themakerskeep #grandeur
Mala Alert 🚨Looking for the perfect gift? Check out the newest Urban Wanderer pieces I’ll post in the next few days. #theurbanwanderer #themakerskeep #grandeur #edmontonmade #malanecklaces
Can’t get enough of sunny fall days in Edmonton! Another shot from this weekend in the river valley. #myedmonton #falldays #yeggers #rivervalley
Check out the newest line from The Urban Wanderer ~ These Chakra bracelets are 6mm stones with a gorgeous lotus centre. Each colour and stone represent a different chakra. Soon to be selling at Grandeur $30 each 💜💙💚💛🧡❤️🖤 #chakrahealing #chakrabracelet #theurbanwanderer #grandeur #themakerskeep #whollyhandmade #yegmade
It’s all about perspective! #walterdalebridge #yeggers #myedmonton #lookingup
Spending a bit of my Sunday taking in the beauty of Edmonton in the fall and of course this amazing new street art on 109th. I would love to be someone’s assistant one day and work on a mural like this! #edmonton #myedmonton #pinkgorilla #streetart #fallcolours #rivervalley
On Thursday I posted about Truth & Reconciliation Day and I spoke about the Indigenous People as Canada’s Indigenous. After reading @tiplerteaches post I realize I was wording it all wrong. Indigenous People were here long before Canada became a country. I apologize if how I worded my post was disrespectful. I am learning and I am grateful to all those who are teaching. #truthandreconciliation #foreverlearning #everychildmatters🧡
Follow The Urban Wanderer on WordPress.com