San Francisco in a Day ~ the ultimate 1 day walking itinerary

San Francisco is one of those iconic American cities that you could spend an entire week exploring and never get bored. From its iconic landmarks, colourful Victorian homes, trend-setting restaurants and its natural bay-side beauty there is no question why this Northern Californian city is considered one of the best in the world. 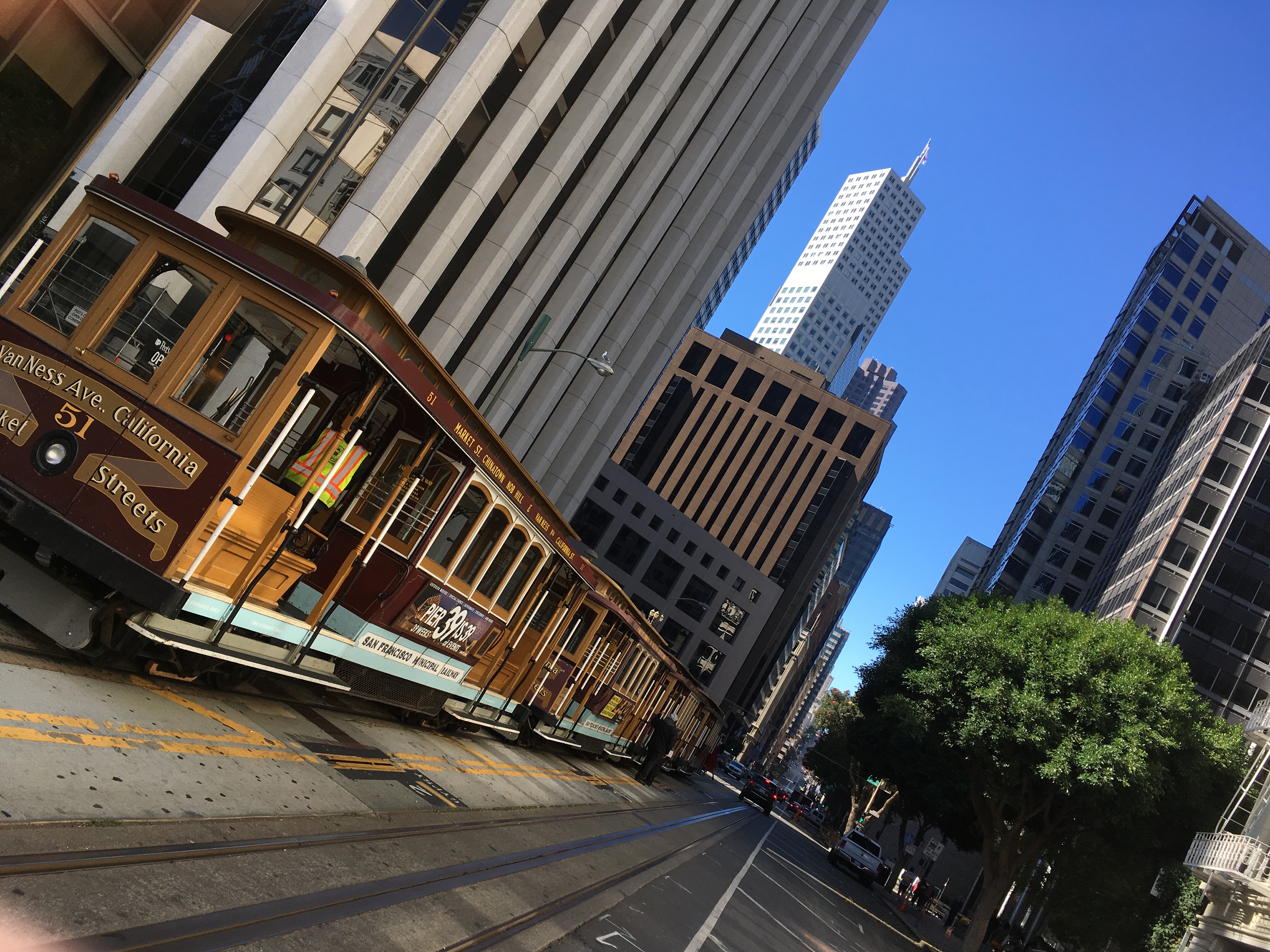 Ideally I would recommend at least four or five days to take in all that this city has to offer, however if time is not on your side and you only have 24 hours to explore, below is a one day walking itinerary that just scratches the surface. After a recent trip to the Bay Area to visit a friend, we spent the day touring the city by foot. This itinerary will basically take you in a full circle where the start and end point is from a BART (Bay Area Rapid Transit) station. Get off the BART at the Embarcadero Station and the perfect starting point is just steps away.

The Ferry Building sits on the edge of the Financial District and is a historic and thriving iconic landmark. First built in the late 1800’s this building became the major hub for travelers entering the city by ferry. Over the course of the next 50 years it is estimated that as many as 50 000 people per day commuted by ferry. Once the Bay Bridge and the Golden Gate Bridge opened in the 1930’s, the Ferry Building was no longer the main commuter route and eventually it sat vacant.

After renovations, the San Francisco Ferry Building was reopened to the public in 2003. It now serves as a trendy world class food market where local artisans and food producers come together in a funky, upbeat atmosphere. Pick up the perfect cup of joe at the Blue Bottle Coffee, or if you need to satisfy your sweet tooth with delicious gourmet ice cream, Humphry Slocombe is the place to go.

Three days a week the Marketplace is also home to the Ferry Plaza Farmers Market ~ Tuesday 10-2, Thursday 10-2 and Saturday 8-2

After a relaxing morning at the Marketplace it is time to experience the infamous island of Alcatraz. The Marketplace is between Pier 1 and 2 and the Alacatraz Departure Terminal is at Pier 31. You can easily walk there or like we did that day, hire a bicycle rickshaw to take you. The rickshaw might be a bit of an overpriced tourist trap (about $20), but it is a fun experience and will save your feet for more walking later in the day.

The only way to experience Alcatraz and its notorious prison is by taking a tour. I highly recommend booking your tour at least two weeks in advance. Purchasing an E-Ticket will not only save you from disappointment if the tours are fully booked, but it also allows you to bypass the long lines. An Alcatraz Island Day Tour includes a round trip ferry ride (which is a fantastic way to see the city from a different angle), access inside the prison, a 45 minute cellhouse audio tour (given by former prisoners themselves) and a walking ranger tour. Once you are on the island it is pretty much self-paced but I would give yourself approximately 2.5 hours to see it all.

Once you are back on the main land turn right and keep walking north along the pier until you reach Pier 39. There will be no question that you are amidst a major tourist attraction when you see all the souvenir shops and places like Bubba Gump Shrimp, but if you walk past the shops to the far end of the pier there is a great place to take pictures of the Golden Gate Bridge.

Another impressive spectacle is watching the sea lions go about their daily business while catching the sun’s rays. As many as 1300 sea lions come to rest along the floating docks in the bay which makes for great photos and free entertainment!

As you keep walking along the Embarcadero you’ll soon reach Fisherman’s Wharf. Don’t miss out on grabbing lunch at San Francisco’s oldest continuously operating business – Boudin Sourdough. Here you can see the bakers hard at work in the bakery and dine in or eat at the casual café. You shouldn’t leave San Francisco without trying the Clam Chowder in a sourdough bread bowl, or if you are vegetarian like me, the Rustic Tomato soup in the sourdough bread bowl is just as divine. 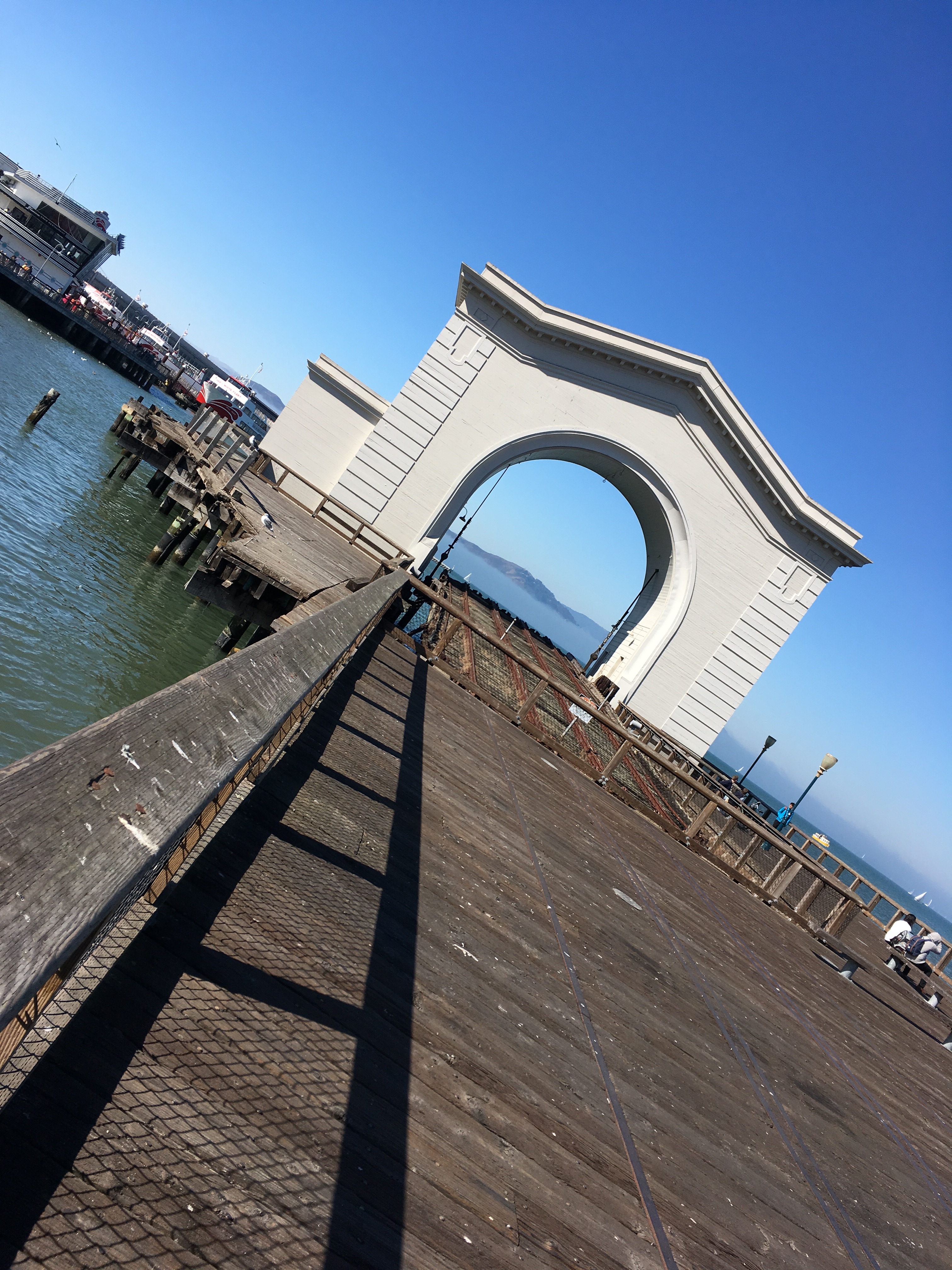 Once your belly is full continue along the waterfront, past the Cannery (another major historical building that was built in 1907 and housed the Del Monte canning location) until you see the massive Ghirardelli sign on the hill. Ghirardelli Square has a long history in San Francisco, and the factory has been in operation since the late 1800’s. In the 1960’s locals feared that this historic piece of the city might be demolished so they bought the property and turned into a vibrant square of retail shops, restaurants and of course the chocolate factory that still exists today. Don’t miss stopping at the chocolate shop ~ who wouldn’t want mouthwatering free samples of chocolate?!

Next on the itinerary is Russian Hill. This is where you will come to know San Francisco’s hilly streets on a more intimate level! We decided to walk up Hyde Street  – and let me tell you I was definitely cursing under my breath…or maybe it was out loud too. Perhaps this would have been the perfect time to catch the cable car that is located at the bottom of Hyde Street near Ghirardelli Square!

After a lot of climbing (or easy riding) Lombard Street will be on your left. This famous one block section is said to be the most crooked street in the world. With houses that line either side of the street and 8 sharp turns in the road, this truly is a spectacle to see. Walking down the street was a far easier feat and watching the cars navigate the sharp corners was quite entertaining.

To get to Chinatown keep walking East on Lombard Street until you reach Powell Street. Now turn right onto Powell and head a few blocks south until you hit Columbus Avenue. Once on Columbus you will know when you’ve hit Chinatown. San Francisco’s Chinatown is like no other. It is the oldest Chinatown in the United States and the largest Chinese community outside of Asia.  Wandering around Chinatown is truly a memorable experience with so many fantastic photo opportunities at every turn. I feel like I could have spent an entire day there, but with only a day to tour the city we kept walking on Grant Avenue until we hit Bush Street. At this point you will come across the entrance of the Dragon’s Gate.

Once you pass through this gate, keep walking south and you will once again be in San Francisco’s Financial District. At Union Square Plaza you can stop and take a photo with the iconic giant San Francisco Heart. Although I am pretty sure at this point you will be tired and ready to pack it in, this is where you can look (or shop) at the high end designer stores. It is said that Macy’s has great views of the district, but to be honest at this point in the day the only view that I needed the most was one in which my feet were up!! Keep walking south until you hit Powell Street and on Powell you can walk east where you’ll reach the Powell Street BART Station. This is where my day finished, but about 20 minutes more will take you to the Ferry Building where you started.

Like I mentioned before, one day in SF will only scratch the surface and probably only make you want to see more. San Francisco is so unique in that each neighborhood seems to have its own personality. Along with its own personality you might also find that certain neighborhoods also have its own microclimate. Don’t be surprised when at one point in the day you will feel like getting your tan on, and the next you want your parka. The fog is another staple of San Francisco that you might not be able to turn your back on. The fog is so prominent in the city that it’s been personified and named Karl! Check out its Twitter page @KarlTheFog

I hope that my walking itinerary will help you experience a little bit of what San Fran has to offer in a nutshell. I promise that no matter what street you stumble on, you too will find hidden gems that make you fall in love with this city too.