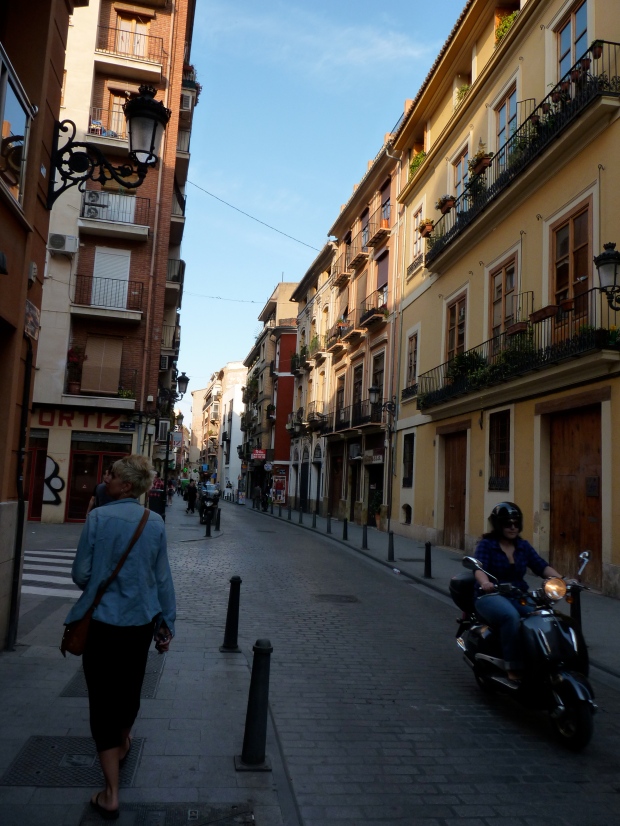 Our time in Spain is almost over. I can´t believe how fast time flies when you are having fun. We have covered a lot of miles and seen many things. From Grenada we headed south to Almeria… we explored the towns around Andalusia all the while trying to find the coveted beach. To be honest the weather hasn’t been really beach worthy the last few days, but I am trying to get in as much sun as I can before coming home. Just being near the ocean makes me so happy. 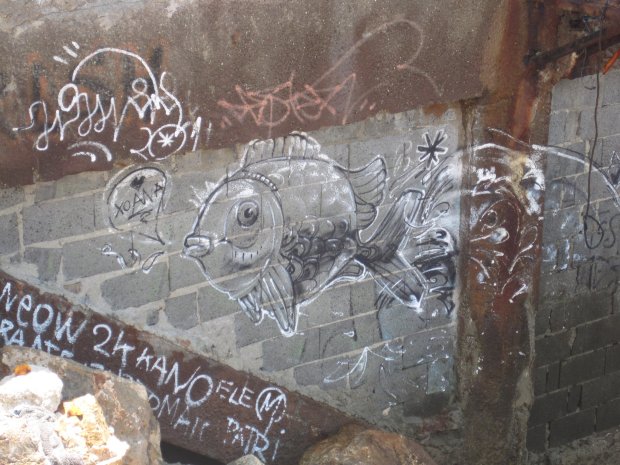 From Almeria we drove about 5 hours up to Valencia. There is a lot to see and do in Valencia, but I am not a cathedral buff so I opted for the beach. Kris and I got all lubed up with sun screen, got our bikinis on and went outside only to find out that it was a tad on the cloudy side. Because we had told Heather we´d meet up with her at the beach later (and we had no way of getting a hold of her) we decided we still should go. The weather did not cooperate and we ended up getting a big whoop ass by the wind. It really was a lovely beach 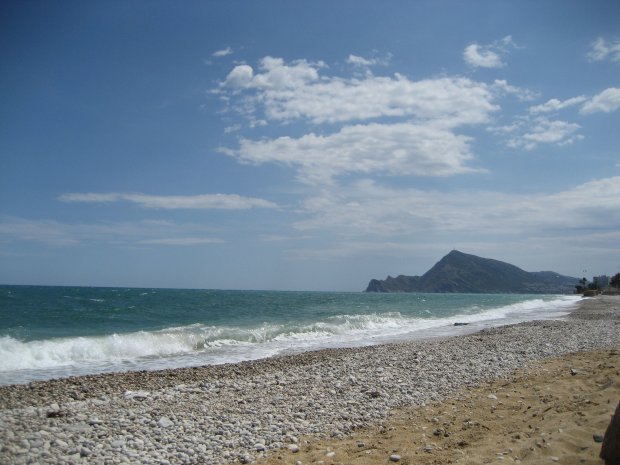 One of the beaches in Almeria

… if you could open your eyes. We wrapped ourselves up in our towels with our hoodies over our heads and laid next to a wall to try to break the wind. It was not a success! And all the while we were getting bitch slapped by the wind, Heather was off finding the Holy Grail! (Literally the Holy Grail!) Who knew that Valencia was home to this iconic  relic!??!  We also experienced a great tapas restaurant in Valencia which was an awesome change from pizza. One thing that doesn’t make much sense in Spain is their hours of operation. Everything seems to be closed from 5 pm until 9, and then the restaurants are bustling. 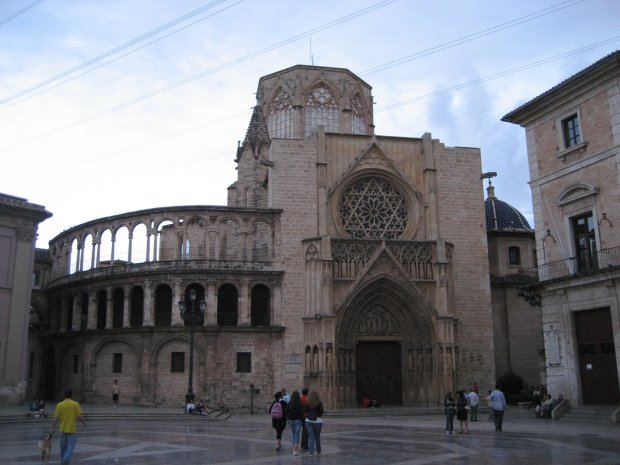 From Valencia we drove about 3 hours to Tarragona(a beach near there). The hotel was infested with children as there must have been some soccer (football)  event that the whole region was invited to. After getting a soccer ball near to the head I taunted the little shits by telling them that I´d kick their ball in the ocean. bahahahaha. Maybe its a good thing I don’t have children! 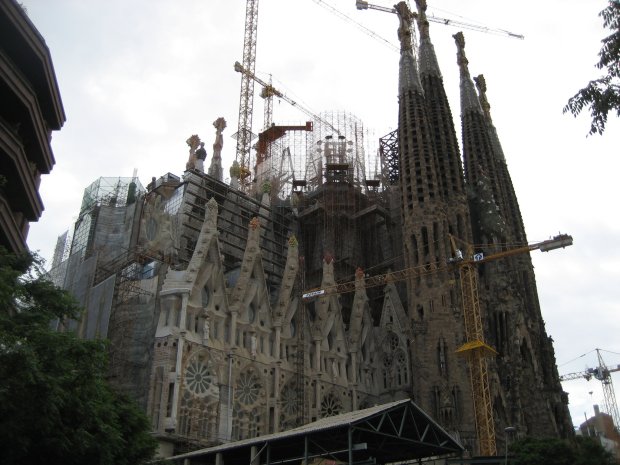 Today we drove about an hour up to Barcelona. I am sure we could spend a week in this amazing city because there is so much to see and do. Today we spent some time walking around Park Guell which is one of Gaudi’s masterpieces and also a UNESCO Heritage Site.  The park is absolutely unique in which it integrates Gaudi’s unique architecture into the surrounding natural setting. Everywhere we went Gaudi’s influence was never missed. From the amazing Sagrada Familia of Antoni Gaudi Cathedral to buildings along the Promenade, there was always something to see. 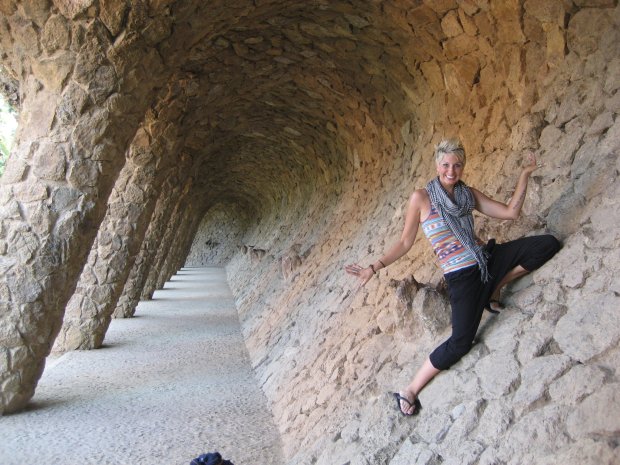 Eating our last paella and drinking a sip of the last sangria was bitter sweet. It has been a fantastic trip and I dread going home to the real world! But until next time…

We have safely made it into Spain and are enjoying the sights and the beautiful weather. 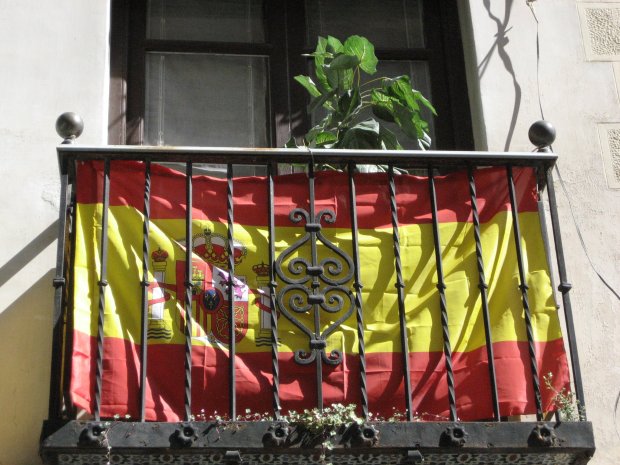 Morocco was so full of crazy wonderful things and it is a nice change to be somewhere a tad cleaner and a little more western. We were definitely getting by a little easier with the whole language situation  – in Morocco French was readily spoken. But here I am completely dense when it comes to Spanish…I guess those three months of Spanish classes with my dad a few years ago came in rather handy…NOT. 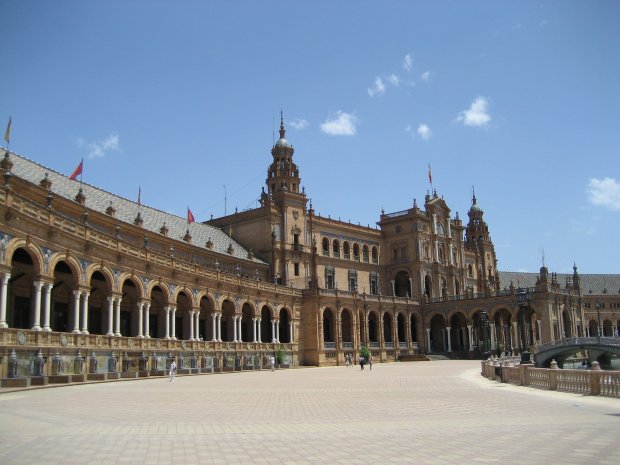 We landed in Sevilla and picked up a car at the rental place. When I tried to pay for the rental car with my credit card , it declined. Apparently my credit card has fraudulent activity on it and they froze the card. Ahhhhh. Someone in China has been having a hayday with my card and now I have to rely on the bank of Heather Bredy. Thank god I have a sugar daddy friend or else I would be screwed! 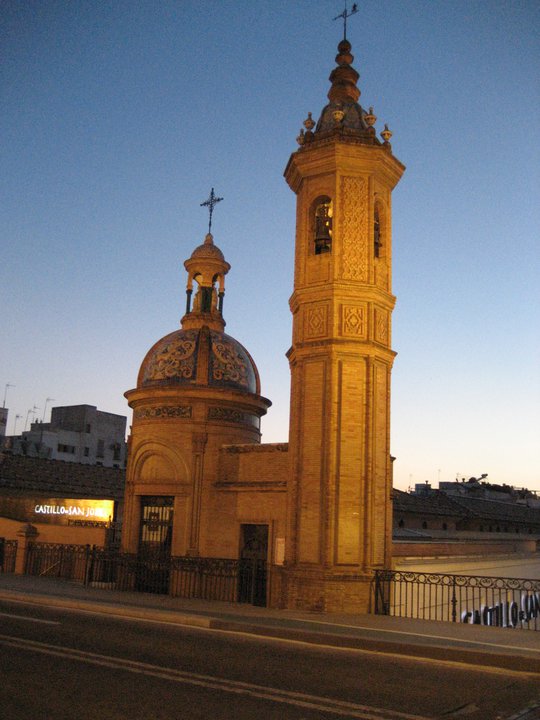 I am the designated map reader and Heather is the driver. We booked our first hotel before arriving here so all we had to do was find it on the map and get our asses there…this seems simple. We found our way to the center of town but could not for the life of us manage to find our hotel in the labyrinth of one way streets. Cars were honking and there was a lot of swearing going on. We could not get ourselves to a place that was on the map! Eventually after a few hours of swearing and sweating we decided to stay at a different hotel on the outskirts of the main center and paid over 100 Euros just for our sanity. We had visions of sleeping in the car so this was the next best thing. 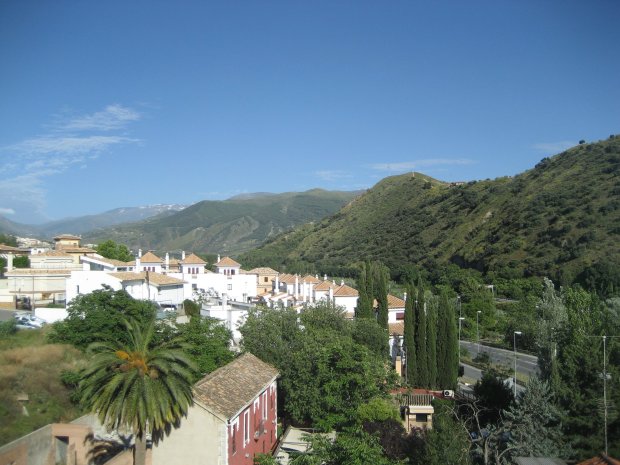 The next day we toured the city and walked our asses off. It is such a beautiful city but Spaniards seem to eat at odd times of the day. That night there was a major soccer game against Barcelona and Manchester. It was fun to be a part of the action – people were spilling out of every bar and pub!! 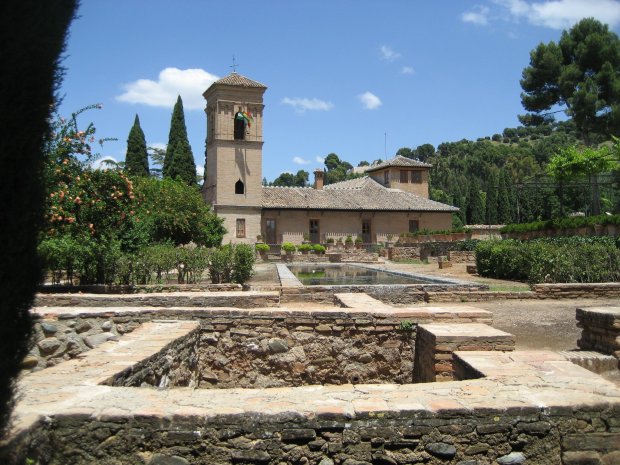 Yesterday we found our way to the city of Grenada. It is absolutely picturesque as it is situated in the mountains. Grenada is where we met up with my friend Kris. After picking her up we went to Granada’s most popular tourist attraction – The Alhambra. It felt like we were right back in Morocco with its ornate Arabic architecture. It is a fortress that dates back to the 11th century.

I feel incredibly grateful to live so close to the ravine. It can’t get much better than seeing a deer. Inhale the fresh air/exhale gratitude 🧡💛💜 #edmonton #edmontonliving #albertawildlife #gratitude
Here’s the first installment of Nanny Knows Best -Ellie on pop culture!
Here is another piece hit off the press! I was actually able to use my wife’s photo in the background of a budding poppy. Nature has some pretty cool shapes and patterns! 12x12 $125
Here’s my newest piece - inspired by my travels to Africa, I can say that zebras do like to turn around and show off their ‘ASSets’! 12x24 $150
As 2022 approaches and we look back on the past year I hope that we can all embrace the memories, good and bad that we’ve had over the year. For me 2021 was a year of mixed emotions. It started with my wedding ceremony being cancelled due to Covid and travel restrictions, then ankle surgery, then an amazing trip to South Africa to visit my wife as soon as we could travel again. From there it has been a waiting game to predict when Liza would finally be approved for permanent residency. We both believed she’d be here for Christmas and clearly that did not happen. What I’ve learned is it’s best to not create expectations and instead try to embrace the little things. There are little joys all around us and even though I want her here as soon as possible I try to remind myself not to wish the days away and enjoy all the stuff in between. From the bottom of my heart I wish everyone a Happy New Year. May 2022 be full of love, laughter and small wins that make your heart dance. Lots of love to you all! 💕
Merry Christmas to all my friends around the globe. Wishing you a wonderful holiday and hoping you can spend some time with those you love. Throwback to 1983 - I can remember my mom taking me to see Santa many, many times growing up. I also remember on Christmas Eve Jennifer and I got to sleep in the same bed with so much anticipation for the morning. We were all incredibly spoiled, always had a giant meal and always had family around to share the festivities. Christmas will always hold such dear memories. #missingmywife #merrychristmas #chrismasthrowbacks
November 30th 2020 was a very special day for me. It was the day I married the most amazing human. It makes me so sad and frustrated that we still can’t be together but I am so grateful that I have found my soulmate. I hope that soon we can be together for good and start our lives together as a normal married couple. Happy anniversary My Person - I love you endlessly.
I feel honored to have been asked to create these three custom pieces that will hang together on a feature wall. They wanted each piece to include family members and landmarks from home. The last piece I covered the faces for privacy of the children but you can still see most of the canvas. When someone wants my art on their walls I can’t help but feel so excited and grateful. 🙏🙏🙏🙏🙏 #mixedmedia #customartwork #theurbanwanderer #familyties #edmontonartist
Be your own kind of beautiful! Here is my latest creation that will up for sale. It’s on a 12x12 canvas - acrylic, pen and ink and covered with resin $125
and here are the rest…
HOLIDAY SPECIAL Are you looking for a unique gift for a loved one? How ‘bout an original mixed media painting by yours truly! Each canvas is uniquely crafted with acrylic, watercolor, pen and ink, photography and covered with resin to give it a glassy sheen. Each piece has a beautiful quote on the back to inspire and motivate. 1. Mandala Turtle 12x12. special $100 2. Hamsa Elephant 12x12. Special $100
Did someone say it’s National Cat Day? No need to give me a reason to post pictures of my cats 😻😻 #nationalcatday #meow
Mala’s Mala’s Mala’s 📿📿📿📿📿📿 Get the perfect gift before I drop them off at stores to be sold to the masses! #malanecklaces #yegmade #madeinedmonton #theurbanwanderer #grandeur #themakerskeep
Mala Drop Day 2 - these new pieces are up for sale and ready to be gifted! #malanecklaces #crystalhealing #theurbanwanderer #themakerskeep #grandeur
Mala Alert 🚨Looking for the perfect gift? Check out the newest Urban Wanderer pieces I’ll post in the next few days. #theurbanwanderer #themakerskeep #grandeur #edmontonmade #malanecklaces
Can’t get enough of sunny fall days in Edmonton! Another shot from this weekend in the river valley. #myedmonton #falldays #yeggers #rivervalley
Check out the newest line from The Urban Wanderer ~ These Chakra bracelets are 6mm stones with a gorgeous lotus centre. Each colour and stone represent a different chakra. Soon to be selling at Grandeur $30 each 💜💙💚💛🧡❤️🖤 #chakrahealing #chakrabracelet #theurbanwanderer #grandeur #themakerskeep #whollyhandmade #yegmade
It’s all about perspective! #walterdalebridge #yeggers #myedmonton #lookingup
Spending a bit of my Sunday taking in the beauty of Edmonton in the fall and of course this amazing new street art on 109th. I would love to be someone’s assistant one day and work on a mural like this! #edmonton #myedmonton #pinkgorilla #streetart #fallcolours #rivervalley
On Thursday I posted about Truth & Reconciliation Day and I spoke about the Indigenous People as Canada’s Indigenous. After reading @tiplerteaches post I realize I was wording it all wrong. Indigenous People were here long before Canada became a country. I apologize if how I worded my post was disrespectful. I am learning and I am grateful to all those who are teaching. #truthandreconciliation #foreverlearning #everychildmatters🧡
Follow The Urban Wanderer on WordPress.com 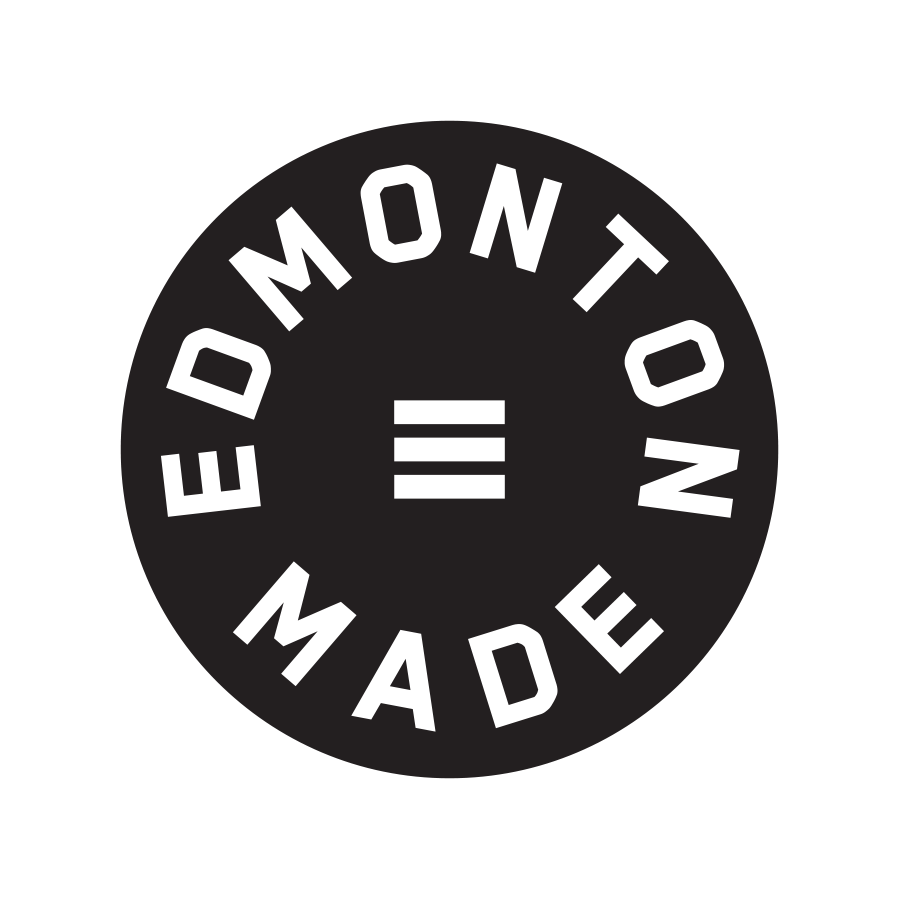