Southeast Asia comes to an end…

So here I sit, at an internet cafe all alone. I have said many goodbyes to all my new friends and shed quite a few tears. Everyone is now traveling down to the Thai islands and I am the lone one who has to fly back home to work. Alas,  I just cant believe a month has gone by!  I guess that saying is right…time flies when you are having fun!

I’m going to backtrack a bit to Chang Mai… It was an amazing day jam packed with wonderful memories. First was the adventure to the elephant camp. Here I rode an elephant through the jungle. This camp is basically a massive plot of land for the elephants where the trainers work one on one with their own elephants. The trainers work at the camp and in the free time the elephants are able to roam free. You can tell that they are treated very well. We got to see them bathe and then there was a show for the tourists.  The elephants are so completely smart. They did all sorts of tricks and the whole time you can tell they are smiling. I think elephants smile! When we were done there it was off to the tiger park.

The tiger park was totally disorganized. I paid to have encounters with 5 tigers. I was supposed to be one on one in the cage with 5 different ones – newborn, two different small ones(5 months), medium and large. With all the chaos I only got to see the babies, small and large but it was amazing.

The babies were between one month and 3. They were so

adorable and cuddly. I was kissing them and they squeaked. So freaking adorable!!!!  I think I shat my pants because I was so excited!  Once they got past the baby stage you couldn’t be near the head of the animal, but it was still very cool. 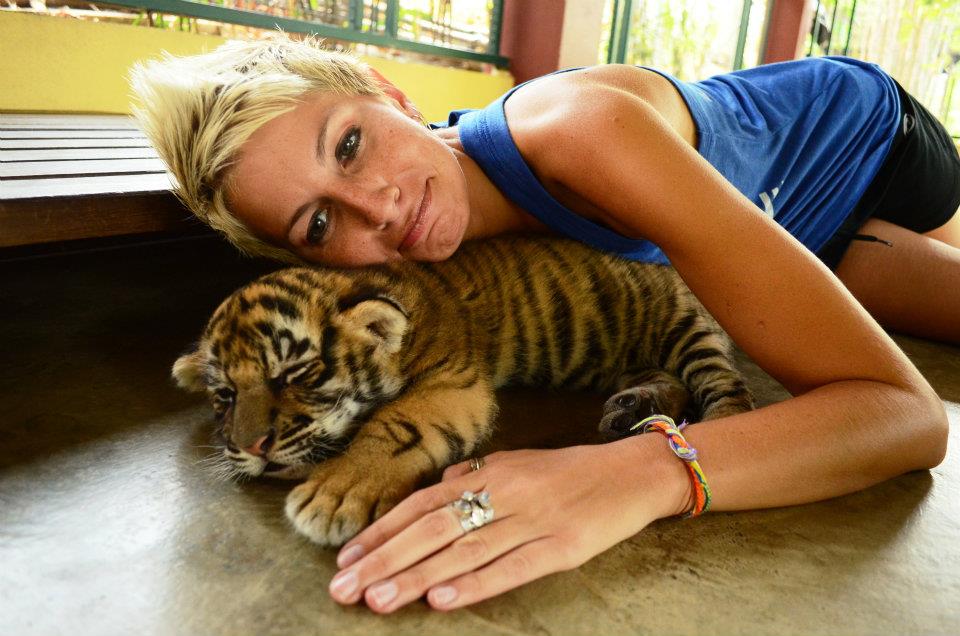 Other than the fact that my camera battery died it was amazing. These beasts are so beautiful and it was amazing to be so close to them. There is so much talk and controversy as to if the tigers are drugged. If they are, and I am adding to this terrible tourist trap then I am ashamed…but I have to believe what I was told by my guide that this park the tigers are treated well. The idea is that if the tiger is fed in the morning they become lethargic and able to doze their way through the encounters with the pestering tourist.

In the evenings they are said to be more playful and that is when the park is closed. As well, the tiger becomes used to the daily feedings and thus their need to hunt is no longer a priority. When I was in the enclosure with the big cat the tiger was definitely lazing about. The trainer was one on one with me in the enclosure and had to remind me to keep my arms away from the head. I get so trusting because I feel like they are just a big house cats!
From there we got on the over night train and made our way down to the ‘Kok’. Bangkok is so bloody hot. The humidity is unreal and I love that mixed with diesel fumes. haha. Yesterday a few of us went and saw the Reclining Buddha. It is absolutely huge but the awe of it was a bit tarnished by the masses of tourists shipped in on coach buses. Damn tourists! From there we spent the afternoon on Kho San Road but had to get out of the heat by escaping to the air con of McDonalds as soon as we could.

In the evening we went for supper…our last supper all together. I really had a fun group of girls. I felt especially old, but it was still a great bunch. After my last curry we were off to the infamous ‘Ping Pong’ show. If you want the X rated version read on…if you would rather not, just skip to the next paragraph. Before I came to Thailand I had seeing the Ping Pong show on my bucket list. I am sure some of you have heard of these shows, but if not let me explain… it basically is a sex show where the girls do tricks out their vagJJ. Why would this be on my bucket list you ask? Well, I have heard of birds coming out, turtles, razor blades and of course ping pong balls. It is one of those things I want to see with my own eyes even though I know it would be horrendous and perhaps a bit scarring.So we get driven to this completely seedy area. Parked outside is a coach bus and inside were all these Indian men. Like literally 90% of the audience was Indian men who had this disgusting trance-like look on each of their faces. To make it worse they didn’t leave after the show ended and stayed for the exact same show again and again. Trust me once is enough. Going in I thought it would be a show, where there would be humor and the girls would play with the audience so to speak. It was nothing like that at all. It felt very wrong from the beginning. Women who looked maybe 16 to about 50 would go on stage while the look on their faces was so incredibly sad. They looked completely gutted and it was awful to watch. A lady shot a blow gun and popped balloons in the air. Kind of crazy. Opened bottles, smoked…the list is endless. But it was their sad faces that made you just feel so heart broken. Then at the end, a man came out and had sex right in front of you. The girl just kept her eyes closed the whole time. By the time we left we were all so depressed and felt horrible for adding to this terrible industry.
We went back to Kho San Road and some partied more than others (I am others). Today all my friends left and saying goodbye to Waza our group leader was so hard. You make such close bonds with people in short periods that it makes saying good bye so difficult. But all good things must come to an end and now I sit here thinking where my next trip should be. First I do have to come home and pay this one all off.
I will leave the hotel at 3 am and the almost 24 hour journey home begins. Lets hope I can actually watch movies this time instead of spending the whole time in the toilet.