April 5, 2017June 15, 2017
This post is originally from February 8, 2017
Waking up to the call to prayer is such a cool feeling. Even though it is at the mere hours of around 5am I honestly just soak it all in as part of the experience. But I have to tell you the Imam this morning had a voice of an angel…NOT! My own dad could have done a better job and no word of a lie he was asked to just move his lips in grade school because his voice was so terrible!

One of the cute streets in the Jewish Quarter

Our morning started with a tour of a few of the major sites of Kochi (also known as Cochin). Our first stop was St. Francis Church – the first European church to ever be built in India in the early 1500’s by the Portuguese.

Next was the fish market which although was smelly beyond belief, was my favorite stop. They catch fish the traditional Chinese way with massive nets attached to a pulley. From shore they lower it down and about 20 minutes later the net would be full. It is so interesting to see people hard at work in daily life that is so different from us at home.

Our last stop was the Jewish Quarter but the street signs named it ‘Jew Town’…sounds a bit derogatory to me don’t ya think? We got to visit Paradesi Synagogue, which is the oldest active  synagogue in the Commonwealth. It was built in 1567 and the impressive floor is completely laid with intricate hand painted tiles. The Jewish Quarter also has a cemetery where it awaits its final 5 residents.  We were told that there are only 5 Jews left in Kochi…funny to me that everyone knows exactly how many Jewish people live here. They even told us a story that the only single woman went back to Israel to find a husband but came back empty handed! She is destined to be a crazy old cat lady like me…but she will be called the crazy old Indian Jewish cat lady!

Eventually we hit the road to make our way south to Alleppey (also called Alappuzha). What we’ve seen in the state of Kerala is lush green tropical backdrops. It is absolutely beautiful and resembles very little of the India that I experienced before. It’s cleaner, greener and the people have genuine smiles on their faces.

The drive was nothing short of starts and stops – jerking, weaving and near side swipes…and I’m guessing you all know where this sentence is leading to!?! Yes Heather the Barfer is back in full force! Oh joy – gotta love initiating the group with my lovely wrenching! 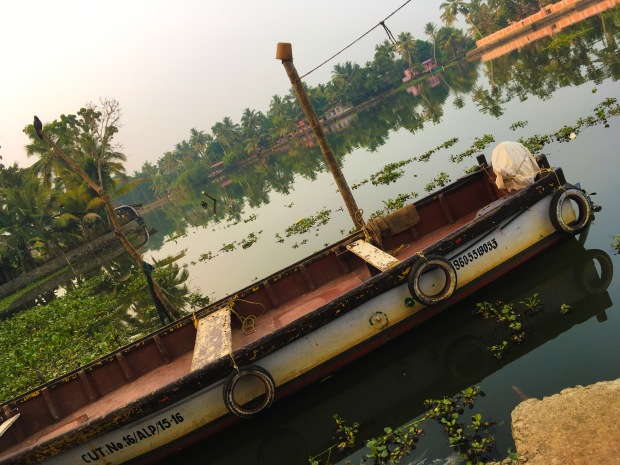 After the ride of doom (my barfing fiasco) we were met by a large canoe to take us across to a little island where we would be staying the night. Alleppey is an area where waterways connect and where lush green mangroves and palm trees line the shores. This is the area where house boating is a major tourist attraction because this back water way of life is so enchanting and exotic. The island itself doesn’t have a name but the village we are staying in is called  Chennamkary. It Is approximately 27km in circumference and approximately 10 000 people live on the island. It is perfect land to grow rice because the island is basically a floating bog. If you were to dig you would actually hit water. It has a small village feel and we are so lucky be able to experience staying at a Homestay here. There are about 10 families that participate in the Homestay business where they take travelers like us in, feed us and make us feel like home. It started about 27 years ago when a group of Swedish travelers were stranded and asked to house them for the night. Now it has grown into a sustainable business where tourism and local life have become a viable way of life. Travelers come in all forms – from tour groups like us, to families, to people that stay for free but come to volunteer in the village. Everyone on the island knows each other and they greet you with genuine smiles and outstretched arms. 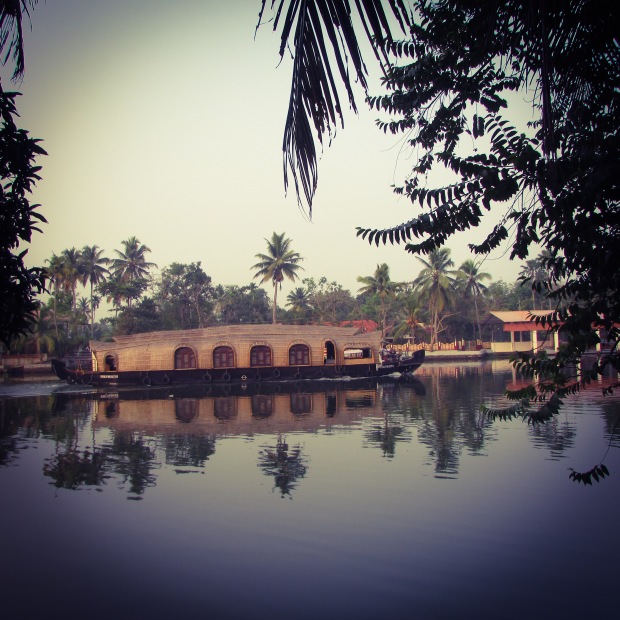 A typical houseboat that travelers can stay on over night

We literally are eating inside the family home and the meals are all prepared by the mother in law of this family. The food was to die for and the family was more than welcoming. I spoke to the father in greater detail about life here on the island and he was open to all my questions. The island itself is continually sinking so it’s an on going process to dig up mud from the water and add to the land. This constant sinking is obviously problematic for maintaining the houses. We can see the effects where some places that 40 years ago were elevated houses now are so sunken that the entrance looks like a basement. This is one of the main industries on the island – construction as it is a never ending battle.

As well, we talked about the education of those in Kerala. The literacy rate in this state is 94% which is clearly the only state in all of India with these statistics. I asked how this came to be and he said most families have someone living abroad who earns money for the family and continues the cycle of  stressing the importance of education. This man lives part of the year in Manchester and works as a financial advisor for banks when he is in England!

The sweet village man that rowed us around the back waters 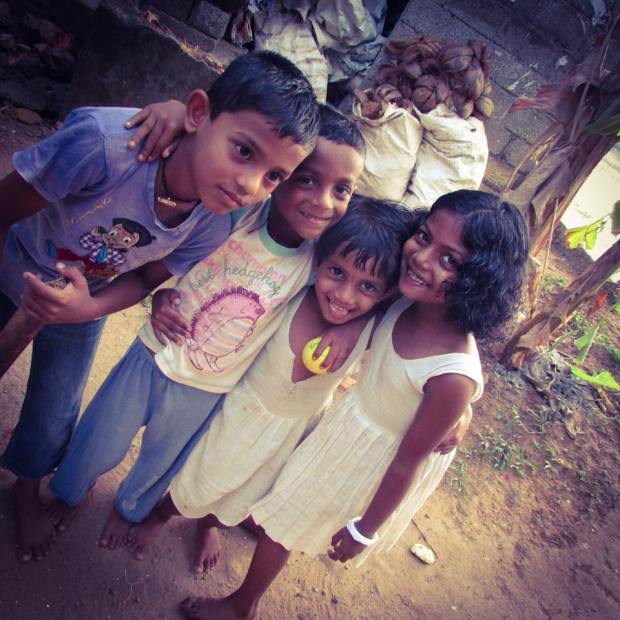 Just some of the local children that followed us around

Life is simple on the island and the majority of villagers here are rice farmers, coconut pickers and construction workers. We were able to truly experience this when we went on a three hour walk through the village. Children were running and playing freely, people were bathing and doing their washing on the banks of the waters and everyone greeted us with genuine smiles. This one lady I came across looked to be about 60 or so and had a massive growth on her forehead. She took my hands and kissed them and when I went to give her a hug she again kissed me on the cheek. Children would follow us and want us to take their pictures so they could see themselves on the display, and we sat and watched the sun set on the edge of a rice paddy while drinking chai from a little hut that served as the local cafe. To top off the night we got back into a canoe and were taken around the back waters by a couple of local men while they sang traditional songs and lullabies to us. The evening was nothing short of spectacular and it’s times like these that I pinch myself because it all feels like a dream!
If you are interested in taking the same tour that covers the same places on my adventure check out  G Adventures ~ Kerala Beaches & Backwaters
If you like this post and want to share it to Pinterest, feel free to Pin here! 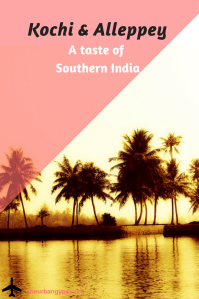