Gorillas in the Mist ~ My Experience Gorilla Trekking in Uganda

Today was a day like no other. Today was the MAIN EVENT.  The reason I chose to travel to these countries. TODAY WAS THE GORILLA TREK!

It started off early where we were picked up at 5:30am from our campsite. It then took two hours to drive to Bwindi Impenetrable National Park. They say that when you are trekking in this National Park you are truly penetrating into the impenetrable! (and f*&@ they were not joking! – excuse the foul language but I want you to get the point). From there we were grouped into 7 and briefed about the trek. There is no guarantee that you’ll see the gorillas and there’s no guarantee how long the trek will take. To be honest I was still sore and exhausted from yesterday’s chimpanzee trek so I knew this was going to be quite the challenge. Looking back it was even more difficult than I even imagined. This was definitely the most physically challenging thing I’ve done in my entire life! (Maybe minus the gymnastics training – but at least back then I wasn’t pushing daisies! )

There are said to be only 786 mountain gorillas left in the world and approximately half of them live in Bwindi (Uganda). The remaining are found in both Rwanda and the Democratic Republic of Congo. I have heard that the terrain in Rwanda is flatter and an easier climb, and of course visiting the parks in the DRC is not advised because of the rebel activity. Interestingly mountain gorillas can not survive captivity and thus are never found in zoos. This is truly a once in a life time event and because people come from so far and pay so much for the park permit, the guides have a Plan B in case you physically can’t make the trek the entire way. If you tap out during the hike you can opt to pay an extra $300US and have 3 local trackers come up and take you the rest of the way on a gurney!!! I have to admit that the thought crossed my mind, but pride and lack of funds stood in the way. I can’t imagine how ridiculous I’d feel being carried up by three people!!! Speaking of park permits, the cost of a one day park permit in Uganda is $600US, whereas in Rwanda it was recently increased to a whopping $1500US! Gorilla tourism is heavily monitored, which is obviously a good thing.  In a single day a habituated gorilla family will only come in contact with one human group, and that group is only allowed to stay with the gorillas for one hour.

Anyway, back to the trek…

It started with an uphill dirt climb for over an hour so that we could reach the actual bush. We passed through small villages with homes and farmland. It blows my mind that locals have to navigate this area to get back down for farming supplies, etc. I guess one would get used to the altitude, but nevertheless this was no easy climb. Once we got into the bush and jungle, the terrain was ever changing –  up then down and then right back up again! With the altitude being 2500 meters above sea level, this uphill climb was even more intense. I decided to hire a porter because this way she could carry all my water and at the same time I could help support a local community member. Thank god I did that! We were going at a pretty fast pace but it took about 2.5 hours to get to the point where we found our gorilla family. To be honest, I really didn’t know what to expect. I’ve clearly watched too many YouTube videos because I thought that once we got to the gorillas they would be in a clearing where we could have a clear view of the entire family playing (like a Disney movie perhaps). Nope I couldn’t be more wrong. We were literally following the guide precariously on the edge of the mountain. He was chopping down bush and trees with his machete so we could get through and see the gorillas. There were leaves that were poisonous and branches with thorns. He would say ‘don’t touch that it’s poisonous’ but WTF, you had to grab it or else you’d risk falling down the embankment. At the same time we had no real footing because it was this loose dirt that crumbled down the mountain when you stepped in the wrong place! Needless to say I had my share of falls but I’m still here to tell the story.

The first gorilla that I saw was the biggest of them all – THE SILVERBACK. Coming face to face with a silverback is like NOTHING ELSE! Males are two times the size of females and the strength of a male gorilla is said to be 10 times stronger than the strongest boxer even taking steroids (not sure how they got this fact-hahaha). They are absolutely massive with arms reaching 7 feet!!!!!  Our trackers told us that this silverback is known to be the biggest  in the entire National Park with the largest family, and here he was maybe two meters away. In two instances we clearly came too close and he jumped to all fours and let out a huge growl.  I nearly shat my pants right there as he lunged at us baring his menacing teeth, but we were told not to worry as he was just showing his dominance and protecting his family – yep it worked , you definitely dominate Mr King Kong! His hands were massive, but the longer I stared at them the more in awe I became as they truly look so human. He was enormous and his back was definitely white! I broke down into tears at one point because while he was staring right at me I started winking my eyes slowly and I’m pretty sure he closed his eyes and winked back. I truly was in utter glory … until I tried to fix my footing and tumbled backwards (thankfully I fell into one of the people in our group and he stopped me from careening further downwards). 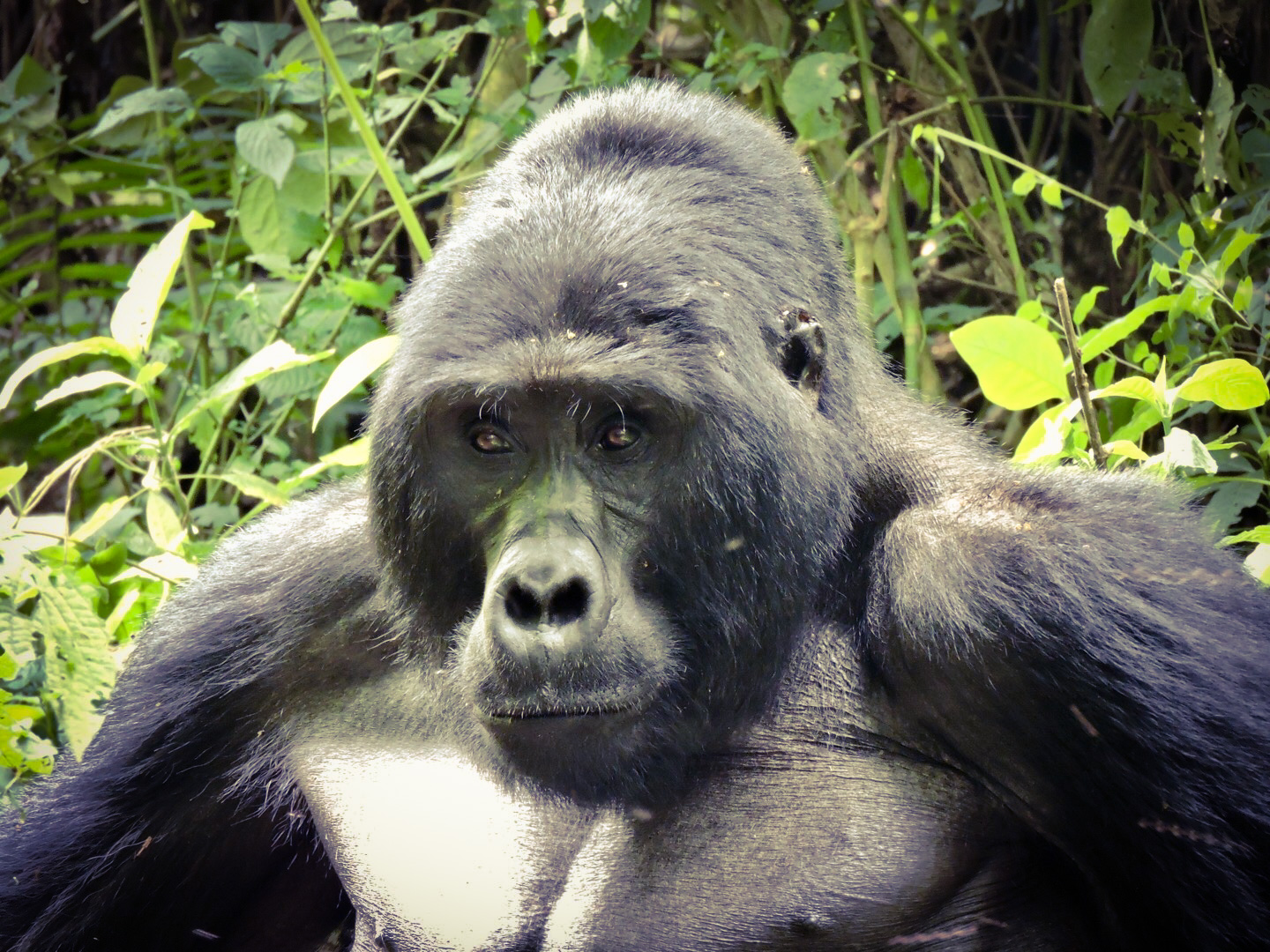 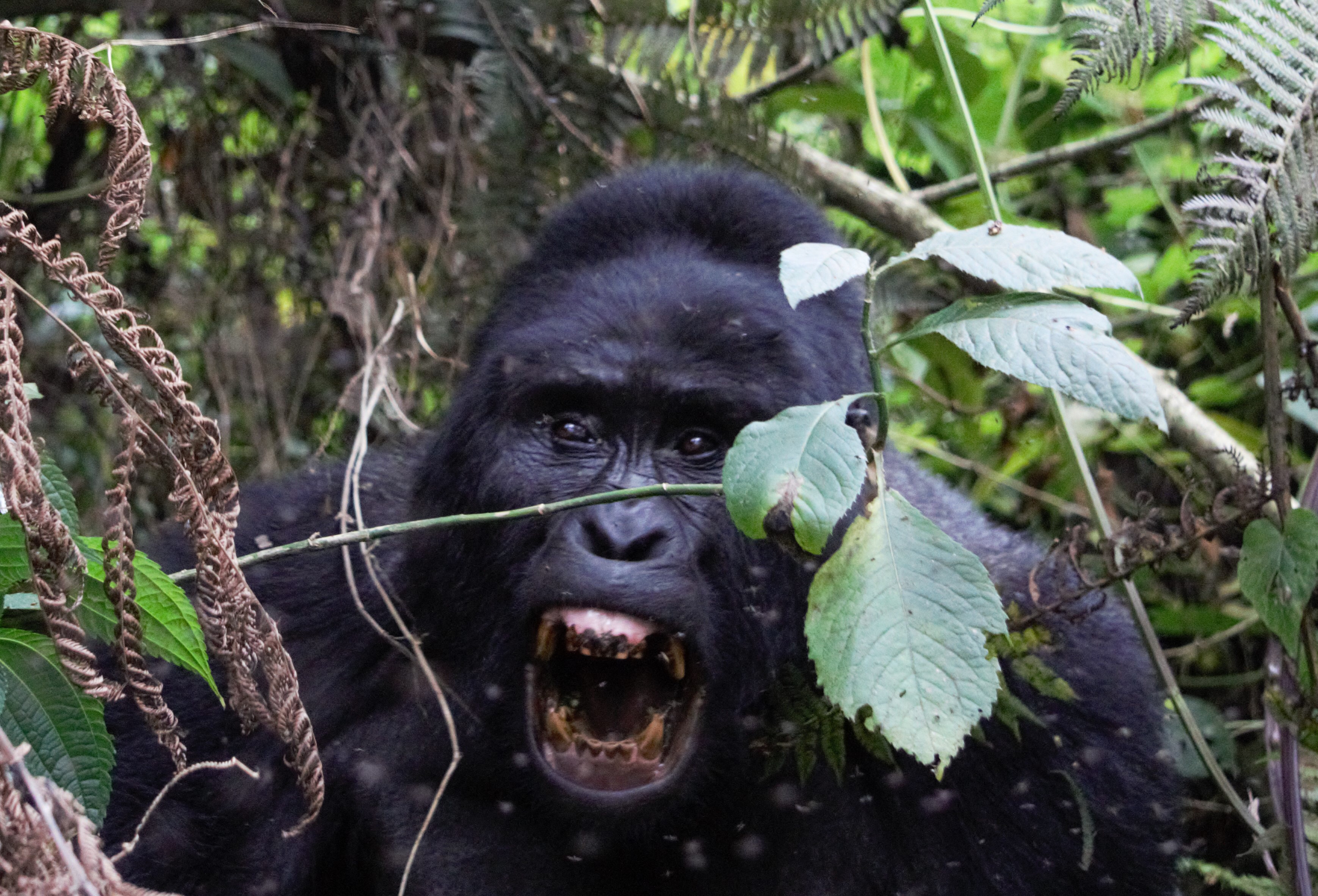 There were so many gorillas near us. Mothers, adolescents and little babies. It truly was like a scene from the movies and my words truly can’t do the experience justice. When the gorillas retreated, our guides would machete through the thick bush so that we would have a ‘pathway’ to follow (and I’m using the word pathway loosely!).  We followed them for an hour and when our hour was up, it was time for us to leave these amazing creatures alone. It was like our group of gorillas choreographed their exit perfectly – when our trackers said our time was up the one mother pulled her baby from the tree and he rode on her back as she climbed through the thick foliage. At this point we were deep in the bush and literally the only way out was with a machete. I was following right behind the guide at that time, and when he swung through the bush to get us out he hit a wasps nest. Again, just like a movie a cloud of wasps came straight out at us and the only thing we could do was try to turn our heads … we couldn’t run because we were all clinging to the cliff. Thankfully the wasps skipped over me and went for my poor friend Lucy who was behind me. Now the trek back…

Once we got to a more stable ground we were all starving so it was time to eat our packed lunch. Sitting on the jungle floor eating a warm, wet sandwich was an absolute luxury. That was the best damn sandwich I had ever had and that ground was the most comfortable place I think I have ever sat!  Sadly we had to get off our asses and get back to the starting point. I was 1 million percent knackered which made the trek back freaking horrendous.  My hips were beyond being in pain and my legs felt like they were on fire! I honestly didn’t know how I’d make it back. (It also didn’t help that I felt like I was going to poop in my drawers!) I would have to stop and sit for breaks so often because I felt like I couldn’t even take one more step. One foot in front of the other and eventually we were back to level ground. That toilet was like the holy grail and sitting down in the hut after was heaven. We were given certificates for completing the trek and a bunch of ladies sang and danced. I literally was in tears because of the exhaustion and the utter elation of seeing the gorillas.

I have wanted to do this for  so long! Was the pain and agony of the trek worth it? YES, it was DAMN WORTH IT!

Just a side note; the gorilla family that I was able to come in contact with was called the Bikyingi Group. 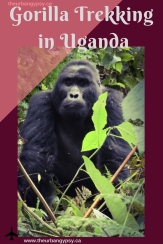 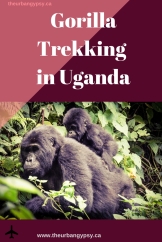