Well…s*%t has just got real on this side of the world. As I said in my last email, we have been living in a bubble and the severity of the Corona Virus was just so unknown to us. We were literally on a deserted island and when we got back we began to hear news that seemed to progressively get worse. I’m sure you probably all know much more than me right now, but s*%t got real when it was ordered that the people on our group from the UK and Germany had to go home. That meant our dear friend Lucy was one of them. Saying goodbye to her was gut wrenching. South Africa would not allow them into its border crossing so they had to get a flight out of Maputo the next day. That literally cut our group in half. The only ones remaining would be Kris and I along with the Aussie/Swiss couple. Thank god we also have our two guides who we have become super close with.

Kris and I were hearing a lot from home and trying to figure out whether we needed to leave right away as well. We registered with the Canadian Government and contacted our travel agent. At that time there was no change to our flights and it seemed smarter to go back into South Africa with our guides. Although there has not been a single case of Covid in Mozambique it just seemed safer to be in an English speaking country where there would be more options for flights home.

As things change so rapidly, by the time we actually crossed into South Africa and got connected to WiFi we too found out that our flights have also been cancelled. Canada is still allowing us back into the country so we just had to find new flights. Thankfully I have an awesome travel agent and she was able to get back to us with new flights. We leave tomorrow (Saturday) flying through Paris (with a lovely 10 hour stop over), Toronto and then will be home early Monday if all goes well.

Crossing into South Africa wasn’t as difficult as expected. They checked our temperature and such, but to be honest they made us do so much more when we crossed into Mozambique. Once on the SA side we made our way to Kruger! Kruger National Park is absolutely massive. It literally is the size of Denmark! We drove through it on our way to our lodging and even though we weren’t on a proper game drive we were lucky to see a crazy amount of wildlife. At one point this massive giraffe came towards us and walked right past our vehicle. From our van window all we could see was his massive nuts!!

Our lodging was outside of the park in a beautiful patch of land surrounded by a river and macadamias nut plantations. When we arrived we had to sign a waiver saying we agree that we know the risk of hippos and crocs coming from the river and that if we pick a macadamia nut from the plantation we understand that the owner will shoot us. Not making this stuff up!!!! 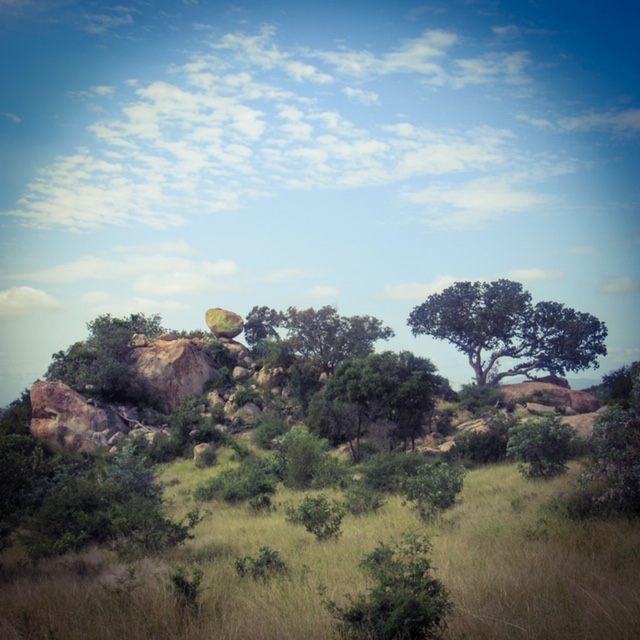 On Wednesday we got up at the crack of dawn so we could experience a day long game drive in one of Africa’s most famous National Parks. Because of our dear friend ‘Corona’ it allowed us to get the VIP treatment with barely any other tourists around. Our guide was telling us that we would be their last drive for some time. The day was amazing!!! Kris and I struggled to keep our eyes open in the morning – Dumb and Dumber come all the way to Africa to see wildlife but have narcolepsy in the vehicle. The lull of the Jeep and the early mornings (and late nights of maybe drinking a few too many) have certainly caught up to us. At one point there was an elephant quite close to our vehicle and I looked over at Kris and she was looking at it with one eye open. What a pair we are! 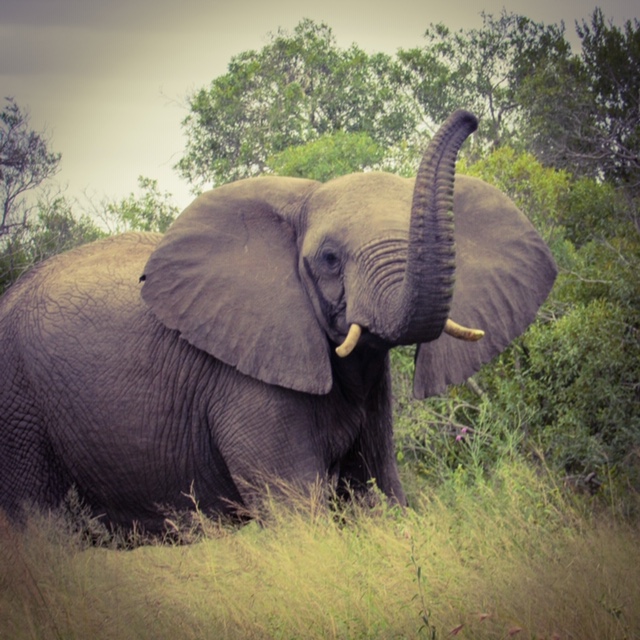 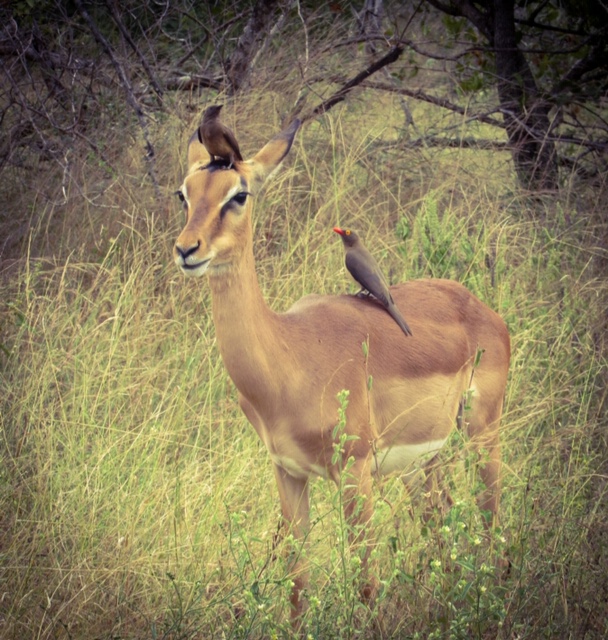 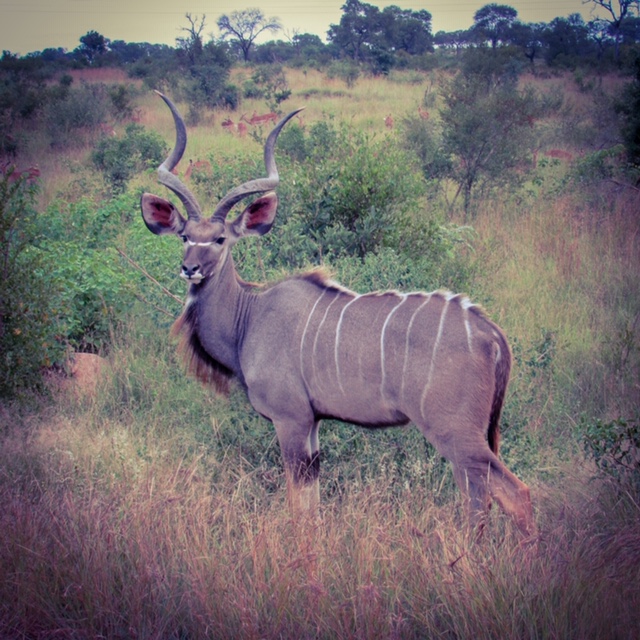 Once we had a little stop to grab a coffee and move around to wake us, we were so much more attentive. In all my game drives over the years I’ve never seen the elusive leopard in the wild. It changed on Thursday and we stumbled upon a tree with a bloody kudu carcass hanging from the branches. With eagle eyes, not far from the kill we were able to spot the majestic leopard. Unfreakingbelievable!!!!!!!!!!

Over the course of the drive we spotted the rest of the Big Five with sightings of all the other incredible wildlife included. I could be in that open air vehicle all day long looking for the amazing animals that only Africa can deliver. Unfortunately poaching is so very real and right now rhinos are being hunted more than ever. It’s brutal because the poachers only want the rhino horn. They stalk them on foot and instead of shooting them (because they don’t want to be caught) they gouge the poor animals with a knife and dig the horn out while the rhino is still alive, leaving the poor thing to bleed out slowly. Because the gestation period along with the length of time a baby rhino breast feeds is so long, you might only get a new baby every 4 years and the the amount poached is far greater than those that are born. We are losing rhinos at a rapid rate. The poachers are paid by the weight of the horn and are smuggled into both China and Vietnam. A rhino horn is made of keratin -the exact same thing as our nails! The Chinese believe it can cure a wide range of diseases and the demand is exponential. The keratin horn is absolutely useless to anybody but the rhino. People are absolutely horrid. 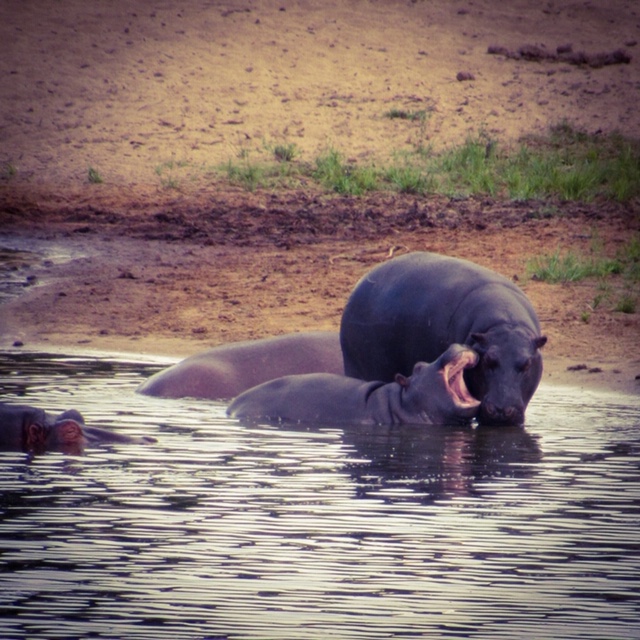 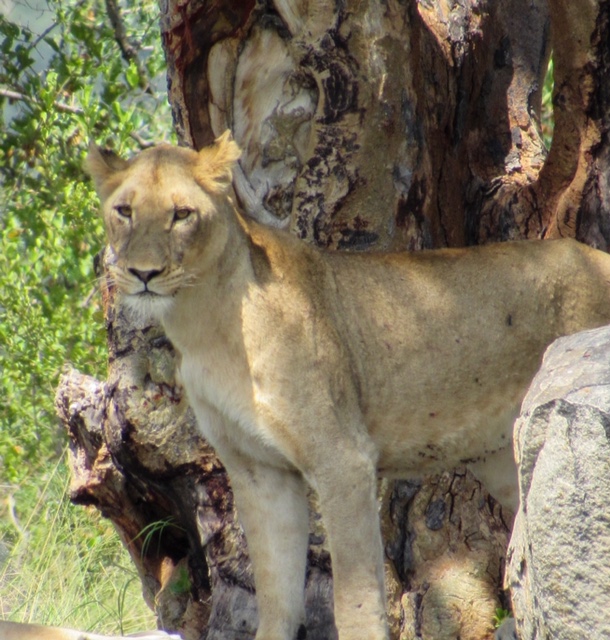 Yesterday (Thursday) we left the Kruger area to return via the Panoramic Route to Johannesburg. The drive was absolutely stunning and everywhere we went the topography changed dramatically. From mountainous green hills, to canyons, to citrus plantations to grassy fields filled with endless pink flowers that make you want to run through them. It was absolutely breathtaking. There are three stops that are also out of this world. One was the exact point in the movie ‘The Gods Must Be Crazy’ where guy throws the Coke bottle off ‘the edge of the world’. Another was Bourke’s Luck Potholes where rivers meet and have carved out incredible circular  shapes into the rocks. And the last was Blyde River Canyon – the 3rd biggest canyon in the world. Again with barely a single tourist in sight we were able to get incredible views with ease. South Africa is bloody amazing! 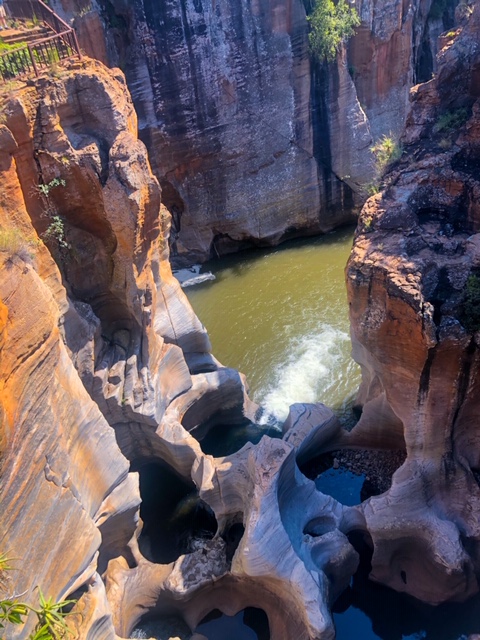 Eventually we made it back to Johannesburg to the lodging where we started the tour. Saying goodbye to the all-star annoying couple was a breeze but it was a whole different ballgame with our guides/friends/sisters Liza and Ferne. I was already crying in the morning knowing we’d have to part later in the day. They had to fly back to Cape Town so it was Kris and I who were seeing them off. Just like Lucy, these girls quickly became like family. We bonded so quickly (perhaps through almost getting arrested) and throughout the trip laughed more than I have in one year combined. On a good day I’m absolute crap at goodbyes so this one was especially heart wrenching. We plan to all come back next year where a bunch of us will road trip through Southern Africa. I guess that makes it a tad easier knowing our paths will cross again fairly soon.

Today we will explore Soweto if all goes as planned and tomorrow we will leave this spectacular continent. More to come later…

If you are interested in taking a tour that covers the places on my adventure check out G Adventure’s Mozambique, Kruger & Swazi Discoverer 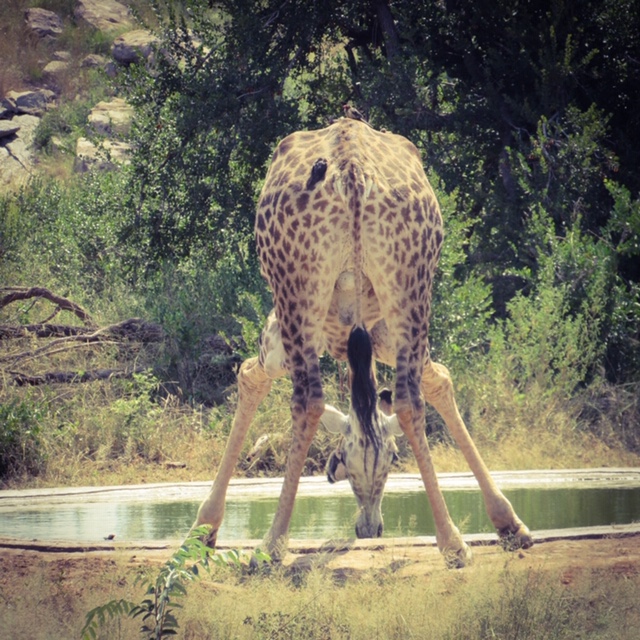