A couple of days ago we boarded the train on route to the city of  Udaipur. I have to tell you that with all my  shopping (bedding and good deals) my bag is now bigger than I am. I need the others to help me board the train as I literally can not get up the steep stairs. We all decided to upgrade from the very basic to the next level up, and thank god we did. As we walked past the train that we were originally supposed ride, it was rows upon rows of wooden benches and then metal bars for windows. People were so crammed in and their heads were gasping at air through the bars. Our seats were definitely not as posh as the Greyhound is at home, but were a hell of a step up from the basic. The 6 hours went by slowly and we finally arrived late at night.

The group that I am travelling with are super great. I love everyone and we all get on so well. Yesterday morning we walked through town to the City Palace. We hired a guide to take us through which was a big mistake. As soon as the man started to speak my A.D.D (attention deficit disorder – that I don’t really have but just have a short attention span at times) kicked in and I was far more interested in taking a look by myself. We couldn’t understand a word he said and he wanted to explain each and every painting. By the end we were so ready for lunch.  Almost everyone in my group are craving meat and me (being a vegetarian)…I am in my element with so many veggie options. With the sacred cows roaming all over the place it is obviously impossible for the others to eat…a steak.  Like I said cows are everywhere and it is imperative to walk with your head down or else you are prone to slipping in something not so lovely which one of the guys here already has.

Last night we were invited by our guide Yash, to his family’s residence as this is where he is from. It isn’t a house, but a pseudo palace with so many floors that I lost count. We sat on the roof and had dinner under the stars with the palace lights and lake around us. Oh yah, we also took a boat ride around the lake yesterday which was interesting as it also serves as a bath and a laundry stop for the locals. Did I mention the lake was green and

there was no way you could see the bottom?
I have been struggling whether or not to tell you a story that happened a few days back as I don’t want to alarm you. I figure I will tell you now, as I am out of harms way and by going through this I feel that I am more on guard than ever. So there have been some men that have taken to me (not exactly sure why but whatevs). You see the other day me and a couple other girls were shopping at a fabric shop where I bought my heaps of bedding. The man who was trying to sell us stuff asked if I wanted to try a sari on and of course I did why not? (I didn’t want to buy one, but this would be a great photo, right?) He took me away from the girls -around a corner, down a hall, and another corner and finally in a room where he closed the door. I went into the change room first and he followed me in and when he locked the door he was blocking the door so I was trapped. Red lights started to flash in my head, but I couldn’t do anything at that point. Then he said ‘I am going to touch you, but only to a limit…unless you want me to go past the limit?” Of course my answer was no. But it didn’t end there. He wanted to know why I didn’t want to go past the limit and why I don’t like Indian men? He persisted the whole time while helping to put the sari on and meanwhile I was so far away from the girls that they couldn’t hear me if I yelled. He said he wanted a girl like me and would like to go past the limit. HMMMMMM. Yes I was so uncomfortable and hoped like hell this man would keep his hands to himself. Somehow it was a blur, but thankfully I talked my way out and he did keep his hands to himself.I definitely couldn’t have gotten out of that place faster. Never again will I go anywhere alone and the funny thing was that he totally could have wrapped the sari around me right there with the girls. Again…you think you  are well traveled…but then something like this happens and I realize how trusting I can be. 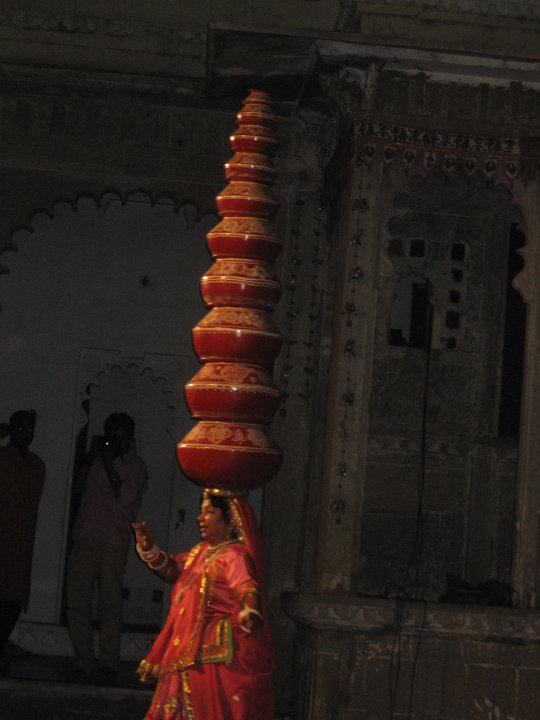 Anyway, I’m still having loads of fun. Tonight we are going to watch a traditional Rajasthani dance performance so that should be good. And tomorrow we bus on to Mt. Abu.
Big hugs from Incredible India