Hello from the beautiful town of Siem Reap! 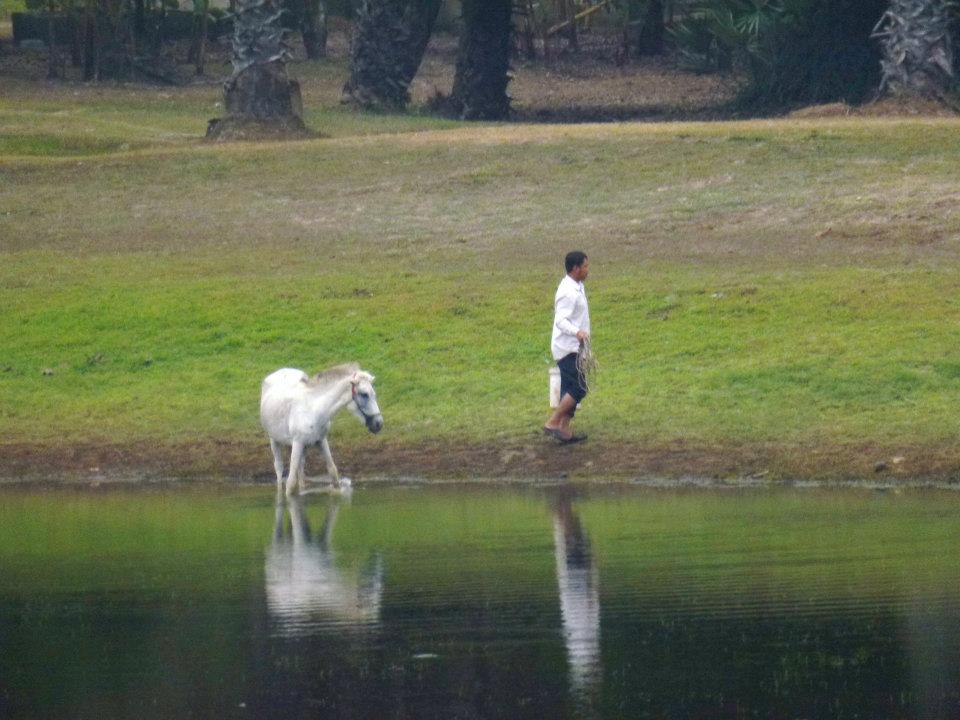 Wow, where to start?? Unlike being at home, so much happens in such little time. I guess that is the beauty of traveling.

On Saturday when I last wrote I mentioned that we were going to a place where orphans were feeding us…hahahah, I had it all wrong. We jumped on our tuk tuks and rode through the streets of the villages. The scenery was amazing. The rice fields are so green and there are rivers and lakes throughout the area. It is simply gorgeous and I tried to take as many mental pictures as possible. We arrived almost being decapitated because the bumpy dirt roads made most of us hit our heads on the top of the tuk tuks. You could hear us coming a mile away because we were laughing and screaming like crazy idiots. The locals surrounded us with greetings and smiles. Children in Cambodia are everywhere. Did you know that over 50% of Cambodia is under the age of 16!!!!! It is very apparent. The house that we arrived at is not for orphans but for children of the entire village. One family owns and lives at the house but has opened their doors to the children of the area to teach them English, crafts etc. We were warmly welcomed and had a local meal that was so delish. It is very much like Thai food, but less spicy.  After the amazing food, children from the village came and played with us. It was so much fun and we can clearly see how much this one woman is doing in her community. One person truly can make a difference! 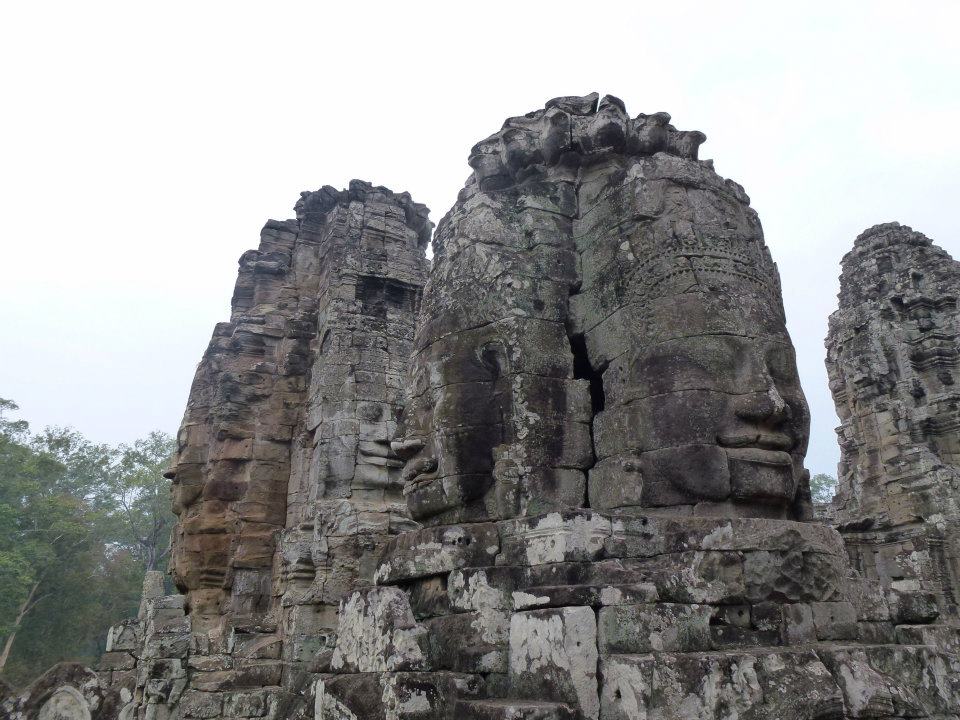 Yesterday morning we woke at 4 am. We were taken to the famous temples of Angor Wat. It was pitch dark when we arrived and we were taken through the gates on very uneven sidewalks. We shuffled down the path very cautiously as you could sort of see that if we strayed to the left or right, we could easily fall into some sort of body of water. Following our senses with fits of laughter we arrived in darkness and sat on something that you could tell was probably ancient. We sat for over an hour in total darkness to wait for the sunrise, and when it rose … right before our very eyes was the beautiful structure of Angkor Wat. Absolutely Stunning!!!!!! 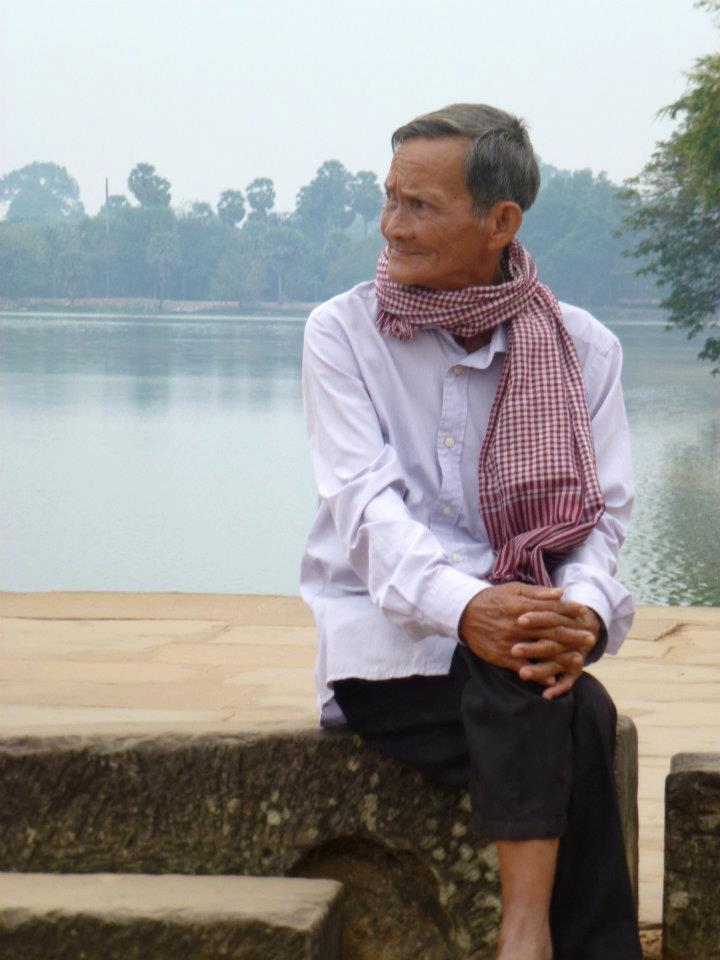 Angkor is one of the most important archaeological sites in South-East Asia. Stretching over 400km squared, Angkor contains the  remains of the different capitals of the Khmer Empire, from the 9th to the 15th century. They include the famous Temple of Angkor Wat , and at Angkor Thom, the Bayon Temple. 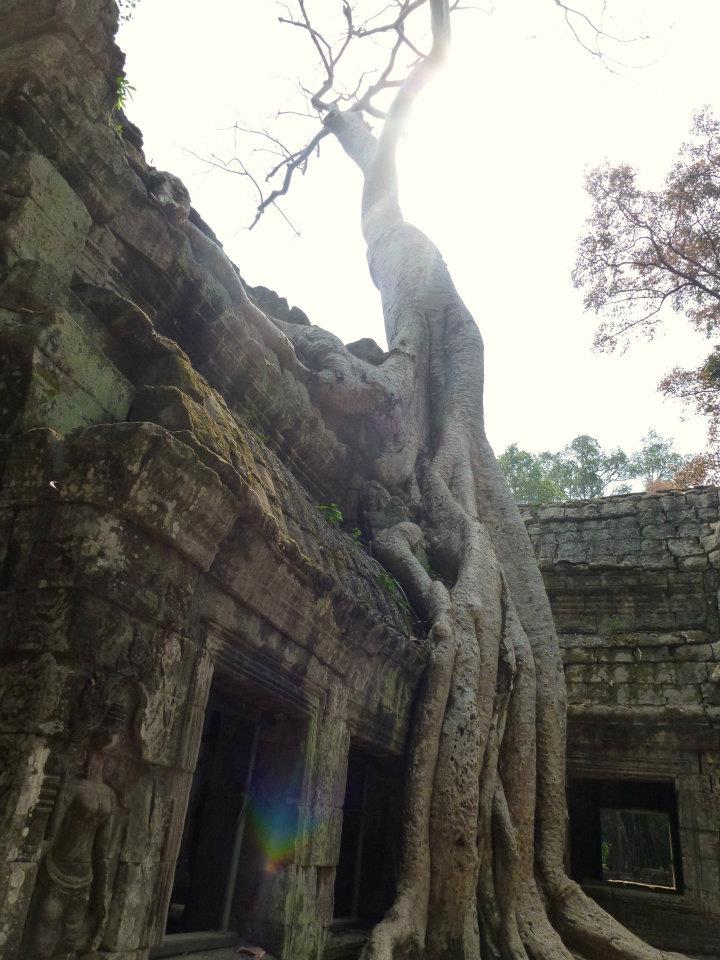 We spent the day touring the four main temples.  Because we climbed stair after stair, my ass and legs are nice and sore this morn. High above the jungle the scene from the top of the temples were a beaut! The most memorable temple for me was called Ta Prohm. The jungle has literally taken over and trees are growing around the temple walls. This was the location where the movie Tomb Raider was filmed. The only complaint I can make which definitely took the beauty away from this incredible place was the abundance of tourists. I think because it was a weekend it was worse than usual…but man there were a lot of people!!! 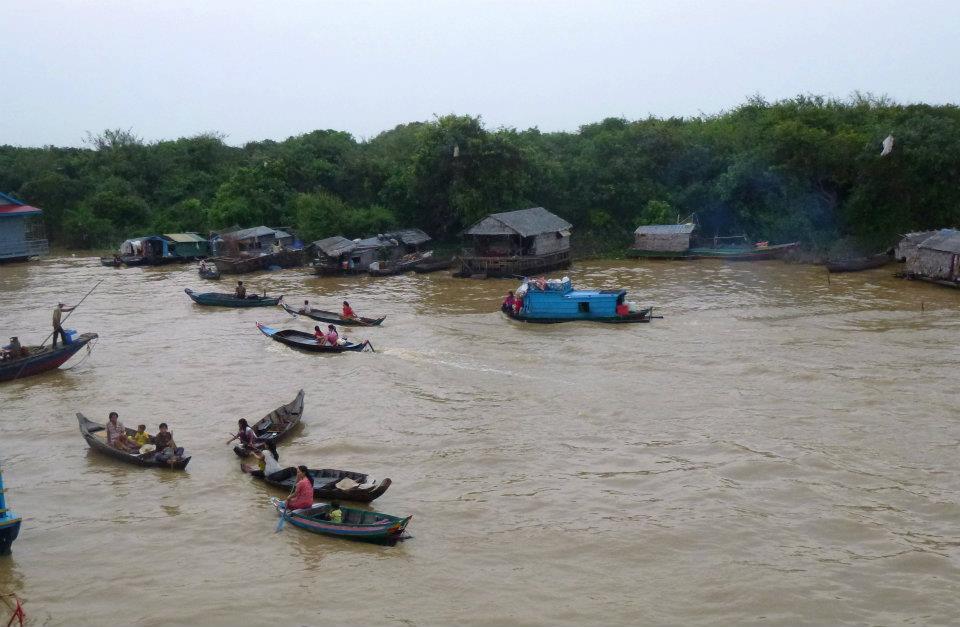 Later in the day after freshening up we went to the biggest lake in Asia. I have never seen anything like what I saw here. There is an entire village that live on this lake. They never leave the lake. The school is floating. Their homes are floating. The police station is floating. Everything is floating!!!  In a small floating home you would see chickens, dogs and cats. Babies were waddling around teetering on the edge of the water. It was like a shanty town on water. It truly amazes me that people live like this. 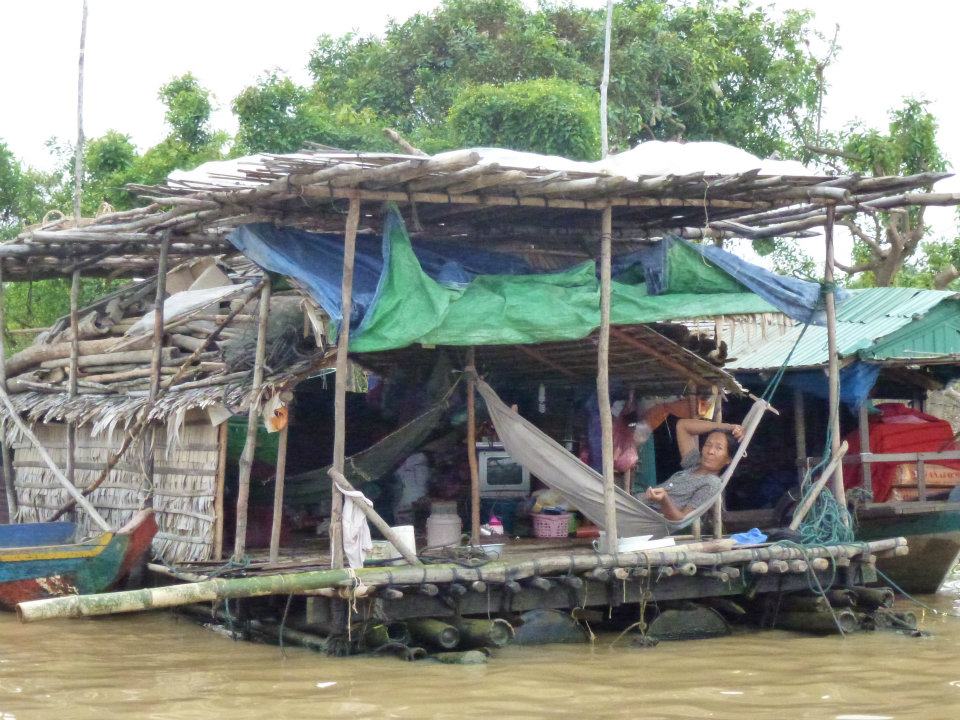 Apparently a lot of them are Vietnamese. They left during the war as refugees and were considered very poor. We were told that if they live on water they can survive because they don’t have to have proper papers or money to pay for them. What was heart breaking was the begging. Children the size of a pea would float up to us in a wash basin chanting ‘one dolla, one dolla’. 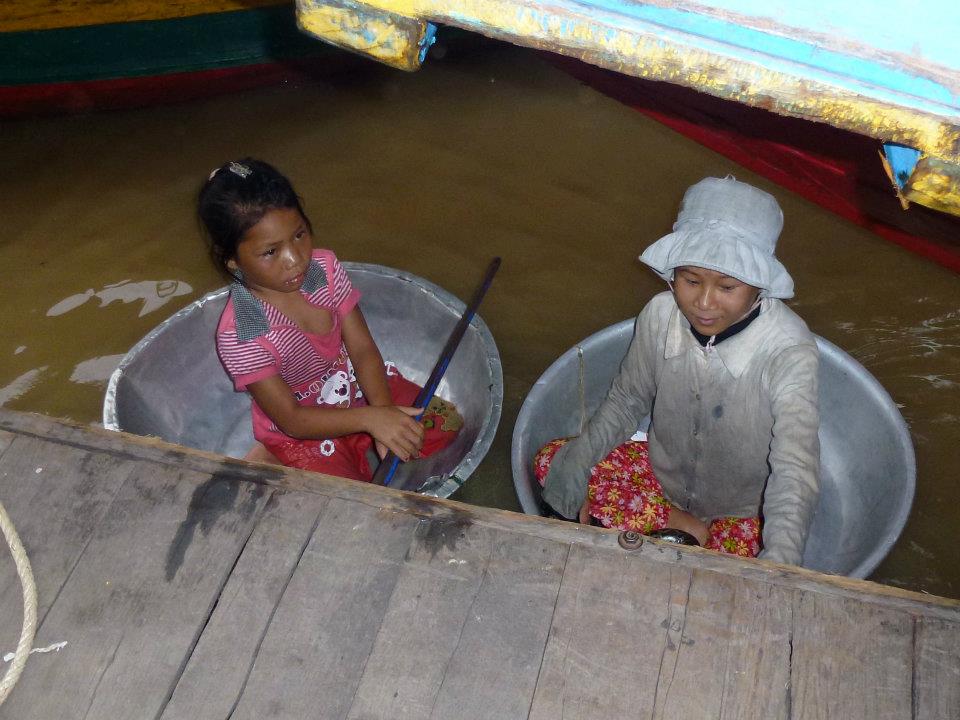 Other children would come up to us in boats with a snake around their neck again…one dolla. one dolla. It is a vicious cycle because you give the dollar, but keep them trapped. It has been like this for ages. This is all they know and how they live. They drink and wash from the water and use the water to dispose their waste. It was brown. Wow. Eye opening. You think you’ve seen it all and then something like this pops up. It was sad, but also so thankful I got to see this. 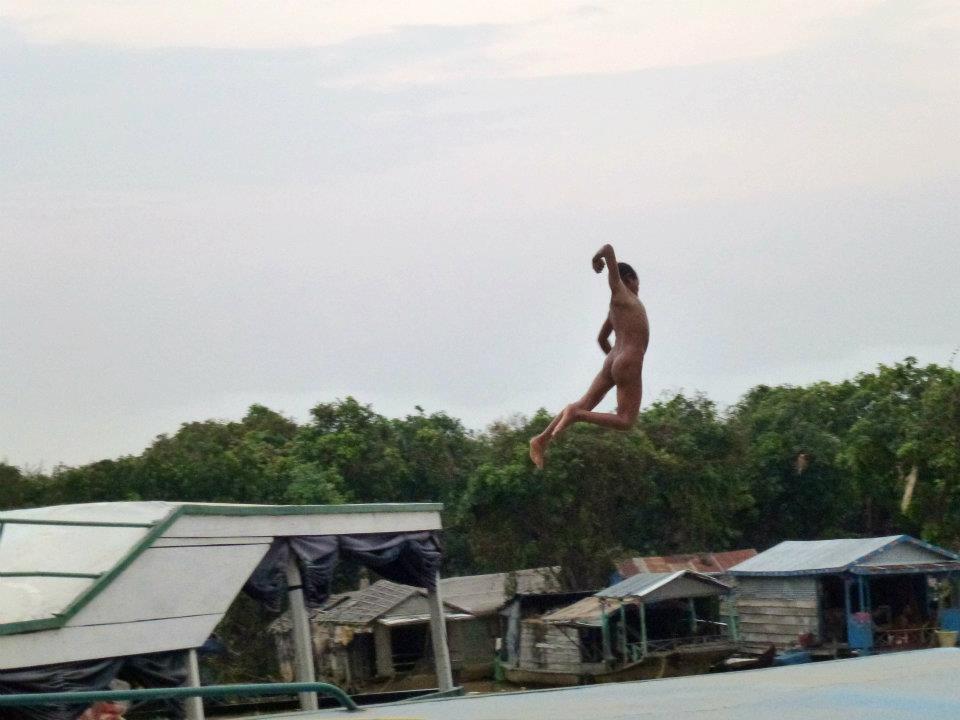 Later we went to town and had dinner. The town was bustling with markets and fish doctors (where the fish eat your dead skin off your feet). I am tempted, but when I think of putting my feet into the same water as thousands of others just had…it makes me realize I kind of would rather shop. I was so dead tired that if you can believe I didn’t buy a single thing. Just walked around in a daze and later took a tuk tuk home to our hotel.
Siem Reap is amazing. Definitely worth staying here longer. But today we are on the road again. Off to the capital of Pnom Penn.